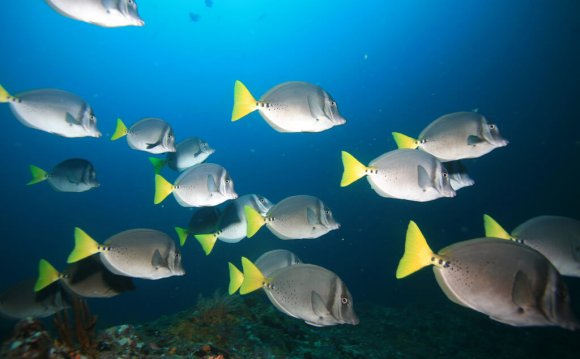 Three Missouri offensive linemen bought a fish during training camp for one reason: to appear on the video board at Memorial Stadium. During halftime on Saturday, that finally happened.

Purina, a food company for cats and dogs, sponsors the video board segment. But a Missouri football multimedia intern promised offensive linemen Kevin Pendleton, Alec Abeln and Paul Adams that their fish would be included.

The three linemen named their crescent Betta fish Boneyard. Each spring when Missouri players retire from football or graduate, their name tags are tossed in a heap on the ground. Missouri offensive line coach Glen Elarbee called the pile the boneyard.

Missouri wanted to honor its former teammates with the fish. Some Missouri players predicted Boneyard would die by Oct. 5. He is still swimming.

Do you like what you see? The Columbia Missourian produces in-depth journalism across many platforms while coaching talented MU students. Independent reporting isn’t cheap to produce, even if it’s free to consume. Every dollar you donate is a gift for life because we touch only the interest earned. We hope you’ll help: Donate or subscribe.
Source: www.columbiamissourian.com