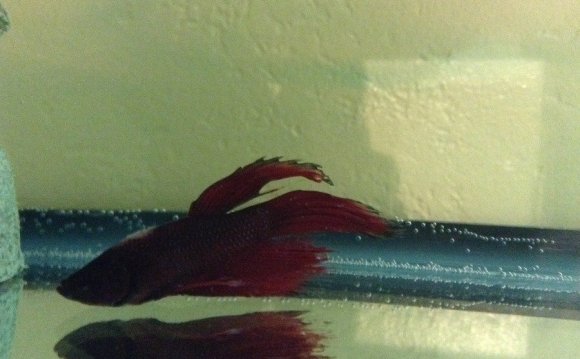 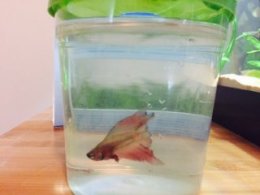 When the beautiful fins of your previously healthy looking fish suddenly seem to be melting away, it can be easy to panic. It may be fin rot! Luckily this common aquarium fish disease is often curable, especially if you take action right away. Keep reading for more information on what causes fin rot and how you can prevent it as well as diagnosing and curing it if it’s already too late.

Fin rot, like many fish diseases, is caused by a combination of factors. It’s a bacterial or fungal infection, meaning the “melting” is caused by bacteria or fungus eating away at the fins. Bacteria such as Pseudomonas that cause fin rot are not that dangerous for your fish by themselves and can actually be found in any aquarium. The real danger is secondary infection, such as when the fish rips its (tail) fin or is otherwise injured, for example by other fish. The bacteria and fungus can easily latch onto the open wound and cause it to become infected.
Another huge factor in fin rot is stress. A stressed fish is much more susceptible to any disease and especially fin rot! Stress can be caused by many things, but the main reasons for fin rot are bad water quality and an improperly cycled aquarium caused by overstocking or lack of water changes. Insufficient feeding, bad choice of tankmates, injuries, disease or stress from transport and all other things that cause stress and/or injuries to a fish increase the chances of infection. The oranda below has both dropsy and a case of fin rot on the pelvic fins. 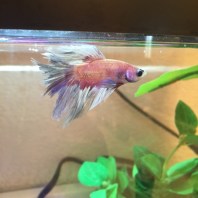 There are a few simple steps you can take to stop fin rot before it has a chance to start.

These steps will not prevent all cases of fin rot but if you always make sure to keep the stress levels of your fish as low as possible and try to prevent any damage/injury, the chances of infection are severely reduced. If you really want to keep the risk of fin rot down, avoid commercially bred very long finned fish such as veiltail goldfish or angelfish, halfmoon bettas and especially rosetail bettas. The large fins are easily damaged and bettas may actually bite off excessive finnage, leaving an open wound. 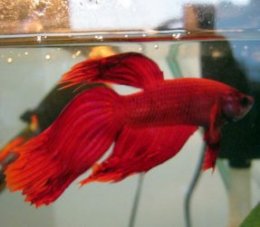 Fin rot is not difficult to diagnose. In the earliest stage, the fins may get red and inflamed looking streaks. This is not visible in all fish though! When the infection progresses, the typical “melting” of the fins begins. In severe cases and with long finned fish, this can happen very quickly, with entire pieces of the fins falling off. The fish may become lethargic and the fins will be left looking ragged and with white or dark-colored edges depending on the type of infection. In very severe cases the fins can be eaten away completely. When this happens and the infection reaches the body it’s usually too late to save the fish, so it’s vital to act quickly when you see any of these symptoms.

In very early cases, increasing water changes and keeping the aquarium extra clean may be enough to stop fin rot. If the infection is already getting serious, it’s a better idea to start treatment right away. Fish that are in a community aquarium should be quarantined for this, as you don’t want to expose healthy fish to unnecessary medication. Keep the quarantine water very clean to prevent further deterioration of the fins. For more information about quarantining fish, check out this article!

If clean water isn’t working or the fin rot is already too severe, it’s unfortunately time to move on to stronger medication: antibiotics. These are not available over the counter everywhere, but in the US you should be able to find them. Maracyn 2 treats gram-negative bacteria that are usually the cause of fin rot and is a popular treatment for bacterial fish disease. With the right treatment you should see some fin regrowth in no time. The bettas pictured below are the same fish!

Fin rot is one of the most easily prevented aquarium fish diseases. Although there’s always a chance you may end up with an infected fish after transport from the store, moving or an accident, keeping up with maintenance and doing research on proper aquarium care and tankmates should help you prevent almost all cases. If you do spot fin rot on one of your fish, keep a very close eye on your water values and take the time to re-evaluate your water change schedule and the amount of fish you keep in the tank!