Can Betta fish live together? 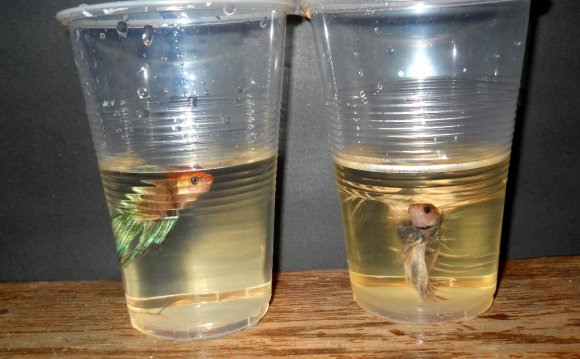 Many people mistakenly believe that betta fish must be kept in “solitary confinement.” Female bettas can live together, and while male bettas will fight with other male bettas, they can be placed singly in a “community” aquarium containing other species of fish.

Another common misconception about bettas is that they can survive without being fed in a so-called “complete ecosystem” that consists of nothing more than a vase and a plant. As a result, fish are being sentenced to dull, lonely lives and slow deaths by starvation. These tiny containers are not suitable for any fish.

Plant roots do not provide adequate food for betta fish. Bettas are omnivorous; in nature, they eat mostly insects and insect larvae. A diet consisting of plant roots may keep them alive for a while, but since it lacks the proper nutrients, the fish eventually become sick and die. A plant placed at the top of a vase may also restrict access that the fish needs to obtain oxygen, since bettas (known as “labyrinth fishes”) take their oxygen from the surface of the water.

Betta fish are native to Asia, where they live in the shallow water of rice paddies, ponds, or slow-moving streams. Since the water is shallow, it is also warm, which is why betta fish in captivity require a sizable amount of water in an aquarium that can be kept heated to at least 75 degrees.

Bettas require a minimum of 10 gallons of water, according to Gaddy Bergmann, formerly of the University of South Florida department of biology. Harro Hieronimus, former chair of the German Livebearer Society and the International Rainbowfish Association, believes that fish must have a minimum of 13 gallons of water in an aquarium approximately 24 inches by 12 inches by 12 inches in size. His expert opinion was made the basis for law in Germany.