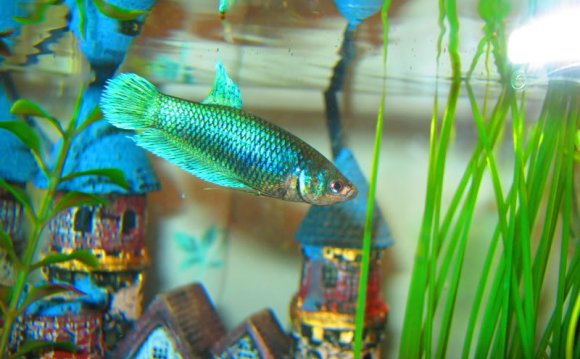 Depending on the species, determining the sex of a fish ranges from easy to nearly impossible. These tips will help you sex common species of aquarium fish.
This is by no means an exhaustive list, but does provide a general overview of the differences between the fish sexes. If you need help with a specific fish, send me an e-mail and I'll give you details for that species.


Angelfish are nearly impossible to sex accurately. Occasionally fully mature males will show a modest nuchal hump, which is a bump on the head just above the eyes. However, don't count on it.

The best way to establish a mating pair is to purchase a half dozen immature angelfish and raise them together. When they are mature enough they will pair off, and you will have at least one breeding pair out of the group.


Bettas are a species of fish that is easy to sex. Males have the long flowing fins and brilliant colors that owners find attractive. Male Bettas are what is usually sold in shops.

Females are not as vividly colored, and have short stubbier fins. It is not always easy to find female Bettas for sale in pet shops. If you can't locate a female Betta, ask the shop owner or manager if they can order one for you. 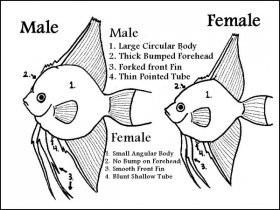 Keep in mind that juvenile fish may not display sexual differences. Ideally compare mature specimens of the same species and color, and compare multiple factors rather than using a single trait to determine sex.

Females are usuully more robust when viewed from above and are usually bigger.

Some Cichlids are easier because males are usual more colorful than the females. Like the Maylandia estherae below:


Cichlids are such a diverse group, that it would take a small novel to give specifics for sexing each species. While many are not easily differentiated, there are a few rules of thumb that apply to quite a few species.

The only sure way to determine the sex of egg laying fish is to do what the experts call "venting" the fish. 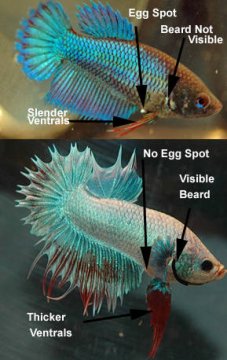 You will see that the females will have a rounded vent (hole) and the males will have a tear-drop shaped vent. If the fish are young, it will be very difficult to discern the difference in shapes.

Although the above general rules apply to many species of cichlids, if you are considering breeding them I strongly recommend doing your homework on the specific species before seeking a breeding pair.


Barbs and other members of the cyprinid family are rather difficult to sex. Differences will vary by species, but generally males are more intensely colored and slimmer than females. Because most cyprinids are schooling fish, one way to obtain a breeding pair is to purchase a group of them.
One way to know is that female barbs are quite larger than the male ones.

For tiger barbs when mature, male tiger barbs will show bright red noses, his dorsal fin will have a red line above the mainly black fin and his ventral fins will turn bright red.

When in spawning condition or fighting for a higher “rank” in the shoal, the males stripes turn a slight metallic green colour. And the tips to his upper body scales turn almost black and shine bright orange in certain light.

The females however, keep their pale yellow noses (may turn slightly pale red at times, which makes it tricky to determine their sex in store). They only show a small area of red at the tip of the dorsal fins, and ventral fins will stay pale red. In females, their stripes stay black.

Gouramis are another species of fish that are not easily sexed. Males and females often are similarly colored and shaped. However, there is one fairly universal sexual difference seen in most Gourami species. The dorsal fin is long and and comes to a distinct point in males, while females have a shorter rounded dorsal fin.

In addition to the dorsal fin differences, certain species of Gourami show color variations between the sexes.


Perhaps the easiest fish to sex are the livebearing fish.

Males are usually smaller and more colorful than the females.

They also possess an external sexual organ, the gonopodium, which makes it easy to differentiate males from the females.