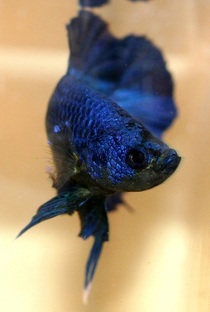 I've been breeding and raising Show type Bettas since 1998, but am currently on hiatus, since 2009.
My Bettas have won several prizes in different european countries.
I'm an IBC certified judge since 2005, and currently a member of the IBC judging board.
With the help of the IBC, I have been able to create a program for apprentice judges in Europe.
My other Betta related activities include: presidency of the Swiss Betta Club; hosting an annual international show; administrating the first and largest french language Internet forum specialized in Bettas; creating and maintaining websites for our club and show.

Jean-Michel has been breeding Show Bettas since 1989, and has won many prizes in Europe and USA.
He entered his first show in 1993.
Jean-Michel is an IBC certified judge since 2008, and was also a judge for the GHBB (Global Halfmoon Betta breeders). 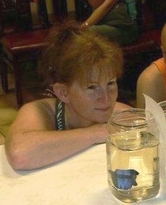 Instead of importing breeding stock from Asia, Jean-Michel periodically outcrosses his own lines to american-bred fish, and then redistributes his Bettas to other breeders in Europe.
He has been particularly working in collaboration with a few other breeders on non-metallic dark iridescent lines.
Jean-Michel has worked with almost all colors, and many different forms of Show Bettas.

Our activities in the Betta world

With a handfull of friends, we are founding members of the Swiss Betta Club, and host an international show each year. Our first show was in 2001.
Jean-Michel and I are both members of several other Betta clubs and do our best to promote the hobby. 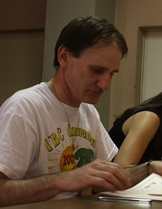 The reasons the Swiss Betta Club has chosen to be an IBC chapter is because we adhere to IBC standards, and also because the IBC is the most largly recognized Betta association in the world.
The IBC has helped us create a procedure to train apprentices here in Europe, without needing to travel to USA, and several judges have already recieved certification in Switzerland, France and Germany.

We travel each year to judge several shows, and help train apprentices.

Jean-Michel and myself are both IBC certified judges.
We apprenticed both in USA and Europe under IBC judges, and passed the written and visual tests.

Both of us are usually willing to travel quit a bit to shows, and have already judged in several cities in France, Switzerland, Germany, USA and the Netherlands.

Betta clubs wishing to host a show are welcome to contact us using the contact form below.

...is in french, we are sorry everything is not translated in english.
However, images being worth at least a thousand words, feel free to browse our photo and video pages:
Source: www.jurabetta.com