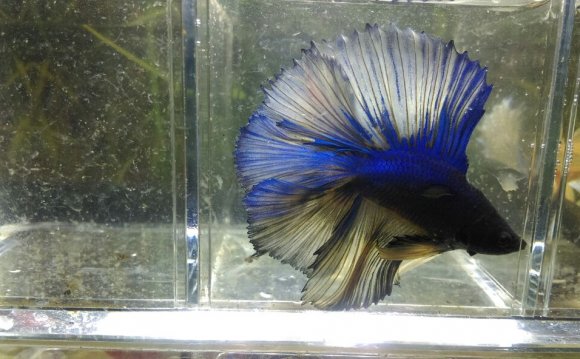 With the popularity of the Betta in A Vase fad a few years back, we decided to devote an area of our website about the proper care of these popular fish. Although many people say it is cruel to keep these fish in those vases, we want to educate you on their proper care so if you do choose to keep these beautiful fish in the Vase, you'll know what to do to keep it alive and healthy.

The Betta or Siamese Fighting Fish was a very popular fish in Siam. The male Bettas are naturally aggressive towards each other and were used for fighting each other. Bettas are found all over South East Asia, Thailand, Malaysia, Vietnam, and Lao where they live in very shallow water or Rice Paddies.

Because these Rice Paddies had very little circulation or dissolved oxygen in the water, Bettas developed an interesting organ called the "Labyrinth". It allows the fish to breathe surface air just like people. The Labyrinth allowed Bettas to come to the surface for clean air. The development of the Labyrinth is believed to be the direct evolution of an animal adapting to its environment.

The Betta first appeared in the United States in the early 1900's. By the end of the 20th century their popularity exploded being sold in most quality pet shops as an easy to keep, beautiful fish that lives in small bowls or the aquarium. Although most of the Bettas that you see today has long flowing fins and comes in a variety of colors, it took years of selective breeding to develop these fish.

The original or "Wild Betta" looks more like a female, with drab colors and short fins. They are still fought for sport in some countries with several hundred dollars being wagered on a single fight.

Bettas are one of the most popular, most colorful, and one of the most controversial fish sold in Pet shops today. Many people argue about the appropriateness of keeping them in small bowls. Bettas do like room to swim and move around so a small Tank is better for them, but keeping them in small commercial Betta tanks is not uncommon. The important thing to remember is that Bettas like it warm and it is hard to maintain a steady warm temperature in a small bowl. Bettas will become increasingly listless when the water temperature falls below 75 degrees F. Water temperature is perhaps the biggest argument against keeping a betta in a tiny bowl (which cannot easily be heat controlled).

Bettas may be kept in a community tank as long as the proper water conditions are met but water movement should be kept to a bare minimum, which means that strong power filters and powerheads are not suitable. Also use care when selecting attendants for Bettas - aggressive or fin-nipping fish should be avoided. Also use caution with Fancy Guppies because Male Bettas often mistake Male Guppies for another Betta and will attack it. Remember only one male Betta may be kept in each aquarium, unless they are separated by a barrier or divider.

Bettas in the wild usually feed exclusively on insects and insect larvae. They are built with an upturned mouth that is well suited to snatching any hapless insect that might fall into the water. Live foods are the ideal diet for the betta, however they will adapt to eating flake foods and frozen and freeze dried foods. Exotic Aquarium sells Live Brine shrimp and Live Tubifex (Black Worms), in addition to Frozen and Freeze Dried foods like bloodworms, beef heart, plankton, and others which are are all excellent options. If flake food is fed, it should be supplemented with frozen and freeze-dried foods, and live foods to keep your Betta healthy and happy.

Breeding Bettas is a very complicated process. Females must be conditioned for breeding for a few weeks before attempting to breed. The Males are very aggressive towards the females so they must be supervised during the breeding process. The male will blow an elaborate bubble nest when he is ready to spawn. If you would like to breed your Bettas we sell numerous books on how to do it or check out some of the .