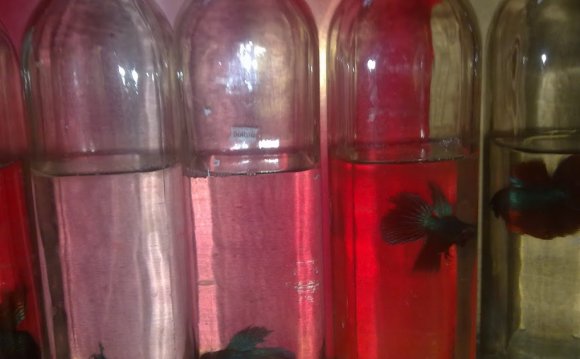 The Paradise fish, Macropodus opercularis, also known as the Blue Paradise Gourami, is among the easier tropical fish to keep and breed. Native to East Asia (China, Taiwan and Vietnam), Paradise Fish were first imported to Europe in the early 1800s. Since they could be kept in small, unheated containers and bred readily, they quickly became popular. Although their popularity has waned, they remain attractive fish that are easy to keep and easy to breed.

Paradise fish are classified as 'semi-aggressive' tropical fish. They can be kept in a community tank, but the tank must be large (so that bullied fish have somewhere to escape) and should have a lot of plants, rocks or driftwood to break up the line of sight. Avoid small tank-mates (they are likely to be harassed or hunted), fin-nippers (like tiger barbs) that might go after the long trailing fins of the Paradise fish, and fish with a similar body shape and behaviour (like other gouramis or bettas) as these are likely to be perceived as potential enemies or rivals.

Like their cousins, the Siamese fighting fish (Betta splendens), Paradise fish are air-breathers. In their natural environment they inhabit small pools which are frequently oxygen-deficient.

Males and females can be kept together. Most people advise against keeping more than one male in a tank, but I have successfully kept adult siblings together. They seemed to work out a pecking order as they matured and things were stable until I removed the six largest males. Doing so destablised the hierarchy, and there was some aggression among the siblings until they worked out a new hierarchy.

Paradise fish are bubble nest builders. A male will build a bubble nest on the surface of the water, usually interspersed with floating vegetation or under a leaf on the surface. Breeding can be triggered by raising the temperature, although I have found that they will breed in winter with no apparent change in environmental conditions. When the female is ready to mate she will approach the male and turn on her side. The male wraps his body around hers, and she releases eggs at the same time that he releases sperm. The eggs are lighter than water and float up into the nest. The parents then separate and the male will chase the female away from the nest and often add a few more bubbles.

Mating takes place repeatedly over the course of a few hours, usually at night. Between 500 and 1000 eggs are commonly produced. Once they are done mating, the male chases the female away from the nest; at this stage it is best to remove her. When my fish bred in a community tank, I the male kept the female away from the nest but she patrolled and outer "perimeter" and kept other fish at a distance from the male.

The eggs will hatch in about 24 hours and the fry remain in the bubble nest until they absorb their yolk sacs. Once they start to swim away from the nest, the male can be removed - if he remains with the fry, he won't eat. Once he starts eating, he is likely to eat the fry. So for the best health of the male and the fry, it's a good idea to remove him.

Free-swimming fry should be fed with commercial fry foods or infusoria. After about a week they can be fed on newly hatched brine shrimp. As they get bigger they can be switched to more conventional fish food. Although they have a reputation for being aggressive, siblings raised together will tolerate one-another quite well. The biggest challenge is figuring out what to do with the babies you have raised - it's easy to raise 50-100 offspring from a single spawning.

For a novice fish keeper who wants to experience what it's like to breed something more challenging than guppies, Paradise fish are an excellent place to start. One advantage over Siamese fighting fish is that the males are less aggressive to the females (or the females are better able to hold their own against overly aggressive males). Male Siamese fighters will harass a female (sometimes to death) if she is not ready to spawn. I have never observed a similar phenomenon with Paradise fish.