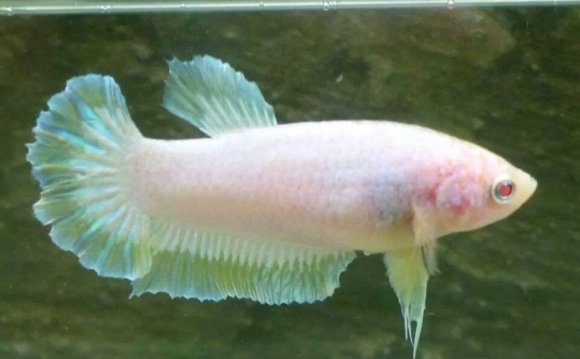 Due to selective breeding, the ever popular male, or Siamese Fighting Fish, is now available in an enormous array of colours and tail types. Detailed below you will find the different terms put to these tail types, patterns and colours and how some of them have come about. There will always be some Bettas that break the rules and don't quite fit into any of the categories below!

The Plakat, or Plakad, is a short-tailed Betta, and is the most closely related to wild Betta splendens or traditional fighting Bettas. Plakats can often be mistaken for female Bettas to the untrained eye, however, males will display elongated ventral fins, a rounded caudal fin and a sharply pointed anal fin. The term Plakat is often abbreviated to "PK". There are 3 sub-categories related to this tail type. There is the traditional Plakat where the tail is rounded, sometimes with a point. Now, due to selective breeding and crossing, there is also the Half Moon Plakat (or "HMPK") where the tail has a 180 degree spread when flared and the Crown Tail Plakat (or "CTPK") has the tail is either rounded or with a 180 degree spread and with elongated rays giving it a "spiky" appearance.

The Crowntail, abbreviated to CT, has become a hugely popular tail type variation. It is unlike any other in the sense that the rays are extended to varying degrees on all fins giving the fish a "spiky" appearance. In show standards, for a fish to be classed as a Crowntail there has to a minimum of 33% reduction in webbing. The reduction on the webbing on CT Bettas also varies vastly, sometimes it can be quite full, some times dramatically reduced so only the rays are left. There are three recognised types of crowntail, the double ray, the single ray and the crossed ray. Crossed rays are the most desirable and the most expensive to purchase. There have also been lesser known variations such as the triple ray, even the quadruple ray! Crowntails can have their tails in a full 180 degree spread, or less than a 180 degree spread depending on their breeding. CT's are prone to fin curling, especially those with little webbing, if their water is not kept immaculate. Breeders are known to "sun bathe" their Bettas for an hour or so in order to keep their rays straight. It has been found also that when breeding, CT's have a heightened amount of aggression compared to other tail types, which can make it challenging to get a successful spawn.

The Combtail (no abbreviation) is a cross of a Crowntail and another tail type. With selected breeding a combtail can be bred into a crowntail, but may still carry a dominant gene such as the VT. They often have the typical droop of the Veil tail but combined with some extended rays on all fins to varying degrees.