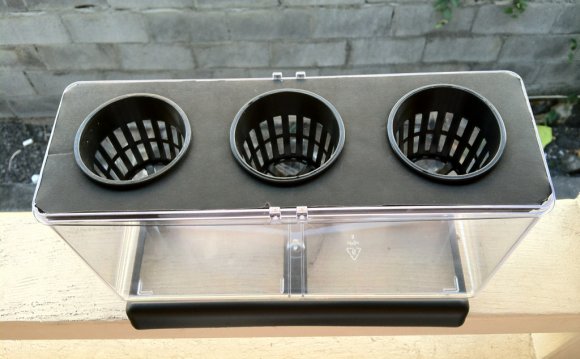 Fish have evolved in complex habitat often with biodiverse surrounding that provide for all of the fish’s needs such as food, shelter, medicine and opportunity for spawning. When fish are placed in aquariums and fish tanks, it often starts out as a sterile environment and then only one or two main inputs of water and fish food go into that sterile environment, quickly turning the fish food into fish waste. Some aquariums have an abundance of aquatic plants that are planted into the stones at the bottom of the aquarium. The plant roots are down in the stones and do not directly have access to the soluble nutrients, so the smell of ammonia can often be smelt in the air coming from unhealthy aquariums. Ammonia in unhealthy fish ponds, tanks and aquariums is removed or released most in the form of ammonia gas which has a putrid smell.

Aquaponics gardens cut this cycle of fish waste nutrients – ammonia – algae growth by having the plant roots directly uptake the nutrients and biologically filter the water. The key issue with conventional aquarium set ups that grow plants with their roots down in the stones, is that the roots are not accessing the soluble nutrients floating around in the water. People pay a lot of money for expensive mechanical filters, chemical reagents, and biological filtration systems such as filter foam that has to be replaced sometimes monthly. 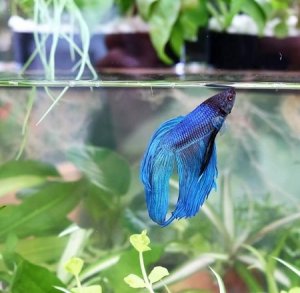 The solution to improving the health of aquariums, fish tanks or fish ponds therefore is to put aquaponics plants into the water with the roots dangling down into the nutrient rich water so that it can filter out the soluble nutrients directly, feeding rapid plant growth and biologically cleaning the tank and reducing algal overgrowth.

Aquaculture in China has a long history and Traditional Chinese Medicine (TCM) has been utilized by both ancient and modern fish farmers to develop better immunity profile in their hatcheries and grow out ponds tom combat diseases like helminth parasites and fungus white spot that affects fish gills. Mortality rates in fish hatcheries can be very high if the water contains helminths or white spot fungus – both diseases can be commonly found in untreated run-off from farms where manure is not composted or treated in a way to reduce the pathogen load such as with hot composting techniques, vermiculture or a biodigester. Traditional Chinese medicine commonly used in Chinese aquaculture is called Ching-hao formula with the main component of Artemesia annua, which is a potent anti-parasite and in human health is the foundation for anti-malaria treatments and also over the counter drugs to treat malaria. Artemesia annua has also been shown to be effective treatment against human lung cancer in trials.

For many years Chinese aquaculture researchers have utilized China-hao Artemesia annua as a natural way to keep fish healthy, one of the methods of delivery of the immunity boosting anti-pathogen herb is to cook it up in big pots and then let it cool and dilute with water, then pour through a watering can into the fish ponds and hatcheries. 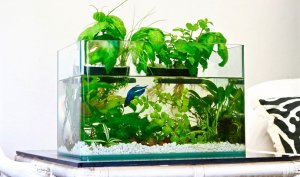 We conducted trials with Artemesia annua plants growing aquaponically on fish ponds with floating wetlands, and also marigold plants to prevent helminth and nematode proliferation in conjunction with research scientists in China. Research collaboration is ongoing and we more natural health management methods of fish and aquaculture will be trialed in the future.

Artemesia annua can be grown in many climates around the world and is currently cultivated in over 150 countries around the world. It has been difficult to get my hands on Artemesia annua seeds in Australia so I have been experimenting with many different herbal plants and growing them directly in the fish tanks and fish ponds to get a micro-dosing affect of herbal plants exuding essential oils into the water via the roots. I started with vetiver because it has very strong essential oils in the roots, in fact many countries that sell the base fragrance for perfumes use vetiver roots as the source. I found that vetiver roots do exude a micro-dose of some essential oils into the water and I found the Betta fish was very healthy even after long periods. Vetiver is a very good biofilter that can remove huge amounts of ammonia, nitrate, phosphorous and accumulate suspended solids into it’s root structure and create more root and shoot growth.

After doing experiments with vetiver on a large scale fish ponds with floating wetlands and having good results, I chose to experiment with basil, mint and coriander as the next trial herbal plants to grow aquaponically in fish tanks and see what the affect of the roots had on the fish. It turns out that basil, mint and coriander / cilantro have strong essential oils that exude out the roots. These exudates are complex essential oils and carried by enzyme chains that slowly move out of the root and down the rootlet branches and into the water. 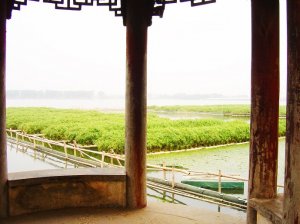 Fish such as Betta fish, also known as Siamese Fighting Fish love swimming into the roots for protection from predators as an evolutionary adaption to hide from water birds, and also enjoy sleeping in the roots as a protective barrier from predator fish. The roots of the basil, coriander and mint that the fish spend so much time, end up rubbing off a significant amount of micro-doses of essential oils and enzymes onto the fish scales and gills, protecting the fish against helminth parasites that can come from contaminated fish feed, or in plant soil. White spot fungus can affect fish badly and usually fish keepers are recommended to melt a pinch of raw non-iodised salt into dechlorinated water and then move the fish in a calm and careful manner with a net or cup into the salt bath dessert sized bowl. Let the fish sit in the salt bath for about 1 -2 minutes, and then move the fish back into the aquarium or fish tank. I find that if I pot up a new basil, mint and coriander plants aquaponically and have the fresh roots hanging down into the water, the fish heads straight for the plant roots handing down to go and bath in the essential oil exudates coming off the roots.

Fish health also can be impacted by availability of dissolved oxygen in fish ponds, tanks and aquariums. When dissolved oxygen levels get low, for example when excess nutrients are not biologically filtered out of the water, then algae can bloom or grow out of control to level that pushes algae into dominance and then when photosynthesis stops, at night for example if no night lights are in operation. Once photosynthesis stops at night, the older algae can die off and in the process of dying the dead algae materials and associated bacteria and algal biofilms consumes oxygen to break down the decaying matter. This rapid consumption of oxygen by the algae die off event is what reduces dissolved oxygen in the aquarium, fish tank or fish pond. When dissolved oxygen levels start getting low fish can gasp for air and if dissolved oxygen levels do not increase by either biofiltration or changing the water, fish can die. Some fish are unique in their ability to survive low dissolved oxygen such as Betta fish can continue to breath as they have a unique evolutionary ability to breath through their mouth instead of gills when required. Its one of the reasons why Betta fish are highly recommended for first timers new to aquarium gardens and home aquaponics systems.