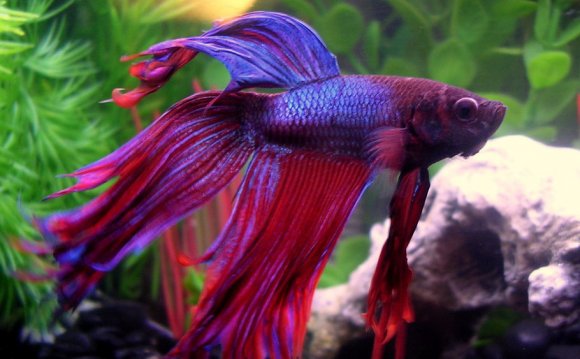 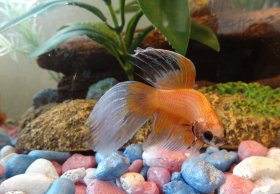 1. How big should my Betta fish’s tank be?

A Betta fish can live in a fish tank that holds no less than 1 gallon of water. Although many fish supply stores may sell or advertise betta tanks that hold less than 1 gallon of water for permanent housing, these fish tanks are deadly for Betta fish. These small fish tanks quickly build an invisible, but highly toxic, chemical called ammonia. This chemical is the #1 killer of Betta fish and is released naturally into the water from betta waste, uneaten food, and exhale from gills.

Because of how fast toxicity can build up in low-volume tanks, it is always better to provide as large of a tank as possible. Tanks with higher volumes can also complete the nitrogen cycle, which is a natural chemical cycle that detoxifies ammonia and nitrite through the establishment of beneficial bacteria in a filter and it requires only partial water changes; this means less work for the owner and a preferable level of quality for the Betta fish’s life. The cycle is most commonly maintained in a tank of 5 gallons or more, especially for those new to creating and maintaining the nitrogen cycle.

Fish tanks that hold less than 1 gallon of water are also dangerous because they cannot maintain heat or be safely heated up to a proper temperature. Because Betta fish are tropical fish they need water between 76 and 86 degrees (F), preferably in the 78 to 82 degree (F) range. Although a tank that holds less than 1 gallon of water may be in a warm room and feel to be in the appropriate temperature range, it is very easy for water temperature to drop 10 degrees over night and such extreme changes can cause the fish stress, lowering their immune systems, and sometimes causing their fins to clamp.

There is no limit to what size a betta tank can be. However, it should be noted that due to poor conditions in pet stores and occasionally genetics, some Betta fish cannot be placed in very large tanks for health reasons; this is a rare scenario. Regardless, they still need at least 1 gallon of water.

2. How often should I change my Betta fish’s tank water?

This depends heavily on the size of your tank and whether or not you have live plants. A recommended basic water-change schedule looks like this:
1 gallon: Do a 100% water change every other day. This sized tank cannot establish a water cycle as it is too small.

20 gallons: Tanks this size should only be cycled. 50% water changed should occur each week.

There are many other tank sizes but these are some of the most common. For in-between sizes, adjust the schedule to your best judgement. Although these are not absolute, strict, must-have schedules, they are recommended for the best health of Betta fish. 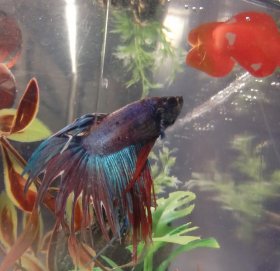 3. Does my Betta fish REALLY need a heater?

Yes! Betta fish are tropical fish, originating from areas around Malaysia and Thailand. Although a tank may be kept in a warm room, unless the room temperature never goes below 80 degrees it is unlikely that the water temperature will not get colder at night, which can easily happen by 10 degrees. A heater is essential for Betta fish health.

4. Can I place another fish or aquatic animal with my Betta fish?

Despite common misconceptions about Betta fish, they CAN be placed with other species under certain conditions. First, you must find out if a species is compatible with Betta fish. Goldfish, for example, are not. If the tank is appropriate to accommodate the chosen tank-mate species and if you do not have a very aggressive fish, a community tank can be established. A male Betta fish, however, can never be placed with another of its own species without a strong divider separating them completely. Males cannot even be placed with females of their own kind unless during breeding, which is a very difficult practice, and after breeding takes places they must be separated once again. Males will kill females that are not ready to breed, have just bred with them, or females they do not like.

Female Betta fish, however, can be grouped together. Females need to be in groups of 3 to 5 at the smallest, preferably with an odd number so no one female becomes aggressive toward the others. A group of female Betta fish is called a sorority and can only be established in a tank of at least 10 gallons for small groups.

5. A pet store employee told me to feed my Betta fish three times a week with as much food as possible in 3 to 5 minutes. Is this true?

No! This is actually very dangerous for your Betta fish. There are two significant problems with this scenario:

a.) Although a Betta fish can go long periods of time without eating, it is not optimal for its care. A dog, in comparison, can survive on being fed twice a week but that does not mean it is the proper way to take care of the living creature. Similarly, Betta fish do need to eat everyday with a nutritionally varied diet.

b.) A Betta fish’s stomach is only about the size of its eye. Eating such a high amount of food can cause bloating and constipation, even death in some cases. A Betta fish will literally eat until it dies due to instinct and should only be fed approximately 2 to 3 pellets, depending on their size, once in the morning and once at night.

6. My Betta fish is not eating! Is he or she sick?

Betta fish stop eating for a few reasons. One is that they are recent purchases. Newly purchased Betta fish may not eat due to the stress of moving from the pet store to a new tank. This behavior can persist on average up to a week. Some adjusting to the new surroundings, without much disturbance, is needed before some new Betta fish will eat in their new homes.