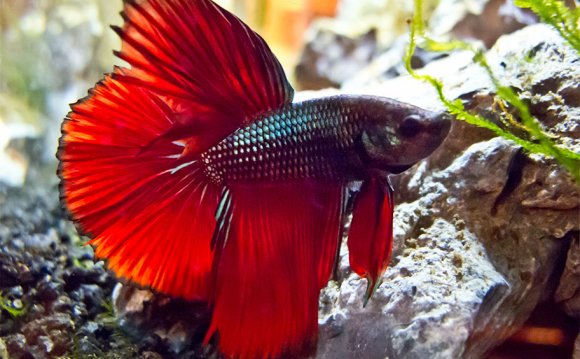 His little voice trailed off into sobs. It had been almost an hour since Gabriel had cried about the death of his beloved pet fish. This was the longest tear-free stretch we'd had since we'd broken the news to him that morning.

Neither my husband Jeff nor I was terribly surprised to find Baxter belly up. Ever since we'd brought our daughter, our second child, home from the hospital, Baxter's care and feeding had taken a backseat to our daughter's. Despite our best efforts, Baxter just hadn't gotten as much food or clean water as he once had. Clearly two is the maximum number of dependent life forms we can successfully tend to at once.

What really came without warning was the intensity of Gabriel's reaction. His grief seemed enormous and without end. As I tried to kiss his pain away, I couldn't help but wonder if I'd done the right thing by telling him. Truth is, we'd gotten away with the bait and switch act (so to speak) before.

I can still picture the bright Sunday afternoon my friend Melissa, also known as "Aunt Melissa, " surprised us with the red betta fish. Gabe, about 2 at the time, climbed up onto his hand-washing stool and watched, transfixed, as Melissa set the little swimmer up in his new home, a glass bowl lined with green and blue marbles.

"I know, " he said. "Baxter." This was name of our babysitter's dog, so our world was already full of Baxters. Now Baxter the fish joined Baxter the lime-green stuffed baby dinosaur and the backyard squirrels, Baxters all.

Gabe spent what seemed like ages perched on his stool calling "Here, boy" as he tapped the bowl and, for reasons I still don't understand, gave the fish detailed weather reports. Life in Baxterland went along swimmingly until, one evening before bedtime, I spied Baxter's lifeless body among the beads. I panicked. I said a bad word. All right, I said a few bad words.

Better, braver parents than I would have broken the news immediately and stayed up all night identifying and processing feelings. Instead, I hurried my son upstairs for stories while whispering a small thank you to the fish gods for not taking Baxter while Gabe was telling him about partly cloudy skies. I proceeded to ignore our bookshelf full of parenting titles and, once I'd successfully tucked Gabriel in, instructed my husband to go to the pet store to purchase a new and improved (read: alive) Baxter. As we thanked Baxter I for his service to our family and flushed him out to sea, we made a pact. We promised that when it came time for Baxter's successor to go to the big fishbowl in the sky, we would tell Gabriel. But that time came sooner than either of us could have imagined. Much sooner.

Baxter II: We Hardly Knew You

A mere 90 minutes later, we discovered that Baxter II had flatlined during a Law & Order rerun. Suspected cause of death: Either Jeff hadn't added enough of the drops that make tap water safe for fish, or Baxter I had returned for his revenge. After another, less ceremonious flush, Jeff rushed out to get a second $3 replacement fish, extra water conditioning drops and our brand new Petco loyalty card.

Baxter III: Swimming with the Fishes

Three made it through that storied night, and Gabriel never said a word. Jeff and I again pledged that next time we would tell the truth. So when Baxter started looking sickly after Miriam's birth, we began preparing for the inevitable. I chatted with our fabulous pediatrician and consulted my mom network. Avoid the words "sleeping" and "sick" so he won't associate either with death, I kept hearing. Instead, opt for old. People, animals, fish, die because they are very old for a person, animal or fish. Surely if we could handle "How did the baby get into your tummy, " we could handle this. Surely.

When we discovered that Baxter III had finally gone to meet his maker, I looked into my firstborn's big brown eyes. "Sweetie, I have something sad to tell you, " I said. "Baxter died."

At first there was nothing. Quiet. Then came the sobs. Straight-from-the-soul wails of pain. I held him tight. He shook. The top of his jammies were soaked in tears.

Jeff and I desperately attempted to comfort Gabe. He could bury Baxter next to the tree we planted when he was born, we told him. But the thought, which seemed so comforting to us, absolutely terrified Gabe. Thankfully, he had never been to a funeral and had no reference point for burials, cemeteries or coffins. The idea of taking water-loving Baxter, putting him deep in the ground and covering him with dirt made us seem like monsters. How I longed for the simple days of explaining where babies came from.