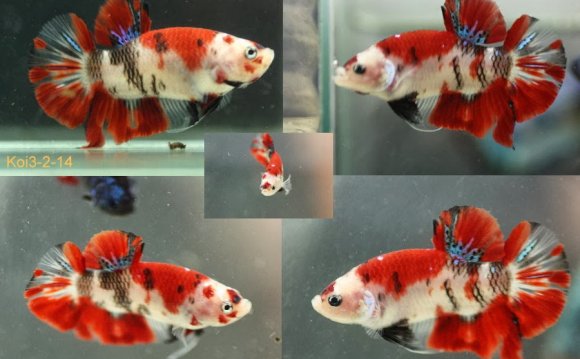 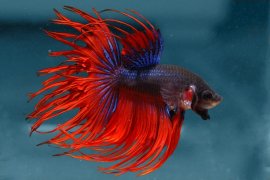 Origin and habitat:
Thailand, Mekong Basin. This species occurs in Central Thailand, being replaced by B. smaragdina in Eastern Thailand and B. imbellis in Southern (peninsular) Thailand [source: Matt Ford, Seriously Fish]. Found in still and sluggish waters shaded by marginal or submerged vegetation such as ditches, ponds, swamps, small streams, canals and rice paddies.

Compatibility/Temperament: For many years not seen as a community fish. Whether a community fish depends on a Betta's personality and how heavily a tank is planted. Some males and females are best in their own aquarium; or females may be kept in a small group called a sorority. Keeping a sorority is not recommended for beginning aquarists. When kept in a community tank, other fish must not be larger or aggressive. Smaller fish may become nippy of the Betta's fins. And you need a back up plan in place should your Betta not be suited for community life.

The colourful varieties of this species now available have been selectively bred from the wild fish, and specifically bred to fight as the common name would suggest.

Diet:
Betta are mainly carnivorous and can be finicky eaters; however they will eat commercial foods once completely accustomed. Bloodworms, mosquito larva, daphnia, Mysis shrimp, tubifex worms and mealworms can be included in their diet. The superior (= upturned) mouth indicates this is a surface feeding fish. Having a high metabolic rate, Bettas should receive frequent small feedings.

Description:
Bettas have been known for several years by a lot of aquarium hobbyists and are native to Mekong Basin found in Thailand. It must be noted there are over fifty Betta species in existence; however, this species remains the most popular as of today. For some reason, they have been called in short as "Betta" which several people argue as rather imprecise noting the existence of several other species.

Males often are known to sport quite flamboyant finnage whereas females, while they can be bright in color, have shorter fins; however, it must be noted that not all male bettas sport long fins. Some have shorter fins and this applies mostly in the case of wild species especially other existing species, not just Betta Splendens. Plakats are a fairly common form of Betta splendens that have short-finned males.

In common with all the species in the suborder Anabantoidei, this fish possesses an auxiliary breathing organ called the labyrinth, named because of the maze-like arrangement of passages that allow the fish to extract oxygen from air taken in at the surface. This is one reason why they are able to survive in oxygen-depleted environments. Failing to reach the surface may cause them to suffocate and eventually die. The aquarium must be kept covered to maintain warm moist air above the surface. Wild fish are able to survive periods of drought when the water habitat mainly dries up; they can survive in a cavity of thick moist clay mud until the next rain.

This fish is reputed to be difficult to breed and is best not to be encouraged among beginners unless they learn to grasp the situation completely to be able to successfully breed them. Females should have a white tube near their rectum which is an ovipositor. The pair must be conditioned properly prior to spawning, and the female must be removed once the breeding pair is done with their spawning ritual or risk having the female killed by the male in his attempts to defend the eggs and territory. The male must be removed in a few days once the fry becomes free-swimming.

This fish has been commonly abused by several misconceptions surrounding their origin and ability to live in waters with very low oxygen content. This fish has largely been debated in terms of how they should be properly taken care of. Is it possible that Betta can live in mud puddles? No, they will not. Mud puddles will simply dry out quickly resulting in the death of the Betta. Is it possible for them to live in vases with plants? No, it is not. Plants block the surface area and in doing so, the Betta cannot reach the surface therefore suffocating and resulting in death. Is it possible to keep them in a tank with no filtration and heater? No, it is not. Betta need warm water and without the filtration system, extremes in water conditions are to be expected stressing and eventually killing the fish. There is some controversy over the minimum tank size required for keeping bettas, but 2.5-5 gallons is agreeable to many as a safe minimum size. While less than 2.5 gallons is acceptable it is hard to maintain water quality in such a small environment. Without almost daily partial water changes the water quickly becomes foul which means an unhealthy home for your Betta.