How to sex a Betta fish?

Many of you have emailed me to ask me how to tell a betta Monsieur from a betta Madame. In other words (plain English, and pardon my French :) ) how to tell a male from a female. Ahhhh the precious eye of the experienced breeder! That eye only can tell without a doubt the settle differences between a female and a young male who is trying to pass as a female, or a young male and a female who is trying to pass herself as a male… I guess what I am trying to say is that it is often hard to sex young bettas (or that bettas are transvestites? :P). Usually, you can look up closely to a betta and if it is wearing lipstick, it is a female. If, however, it has lipstick on it’s gill covers, then it is a male. LOL OK, so I’m pulling your leg, bettas don’t wear lipstick (sheeesh, I wish they did, it would sure make our sexing job easier!!). However, since they don’t, here are a few other pointers to help you out (for real this time):

Males have long fins, usually about two to four times the length of a female’s fins. So that is the most obvious way to tell them apart. To illustrate, here are two photos: Notice the male’s fins (left) as opposed to the female’s (pictured right).

Since only fully grown males have long fins, and since young male bettas have very short fins, this technique may not come handy when trying to sex young immature bettas. (well darn!)

Male’s bodies are less wide, and more elongated. Yeah, yeah, I know it sounds like Chinese. It did sound like Chinese to me to when I first started breeding bettas. Now I get it. It is true that the body shapes look slightly different. But it is not the easiest way to sex bettas. After looking at thousands and thousands of bettas, you too will see it. (or need glasses).

Females have egg spots. Males usually don’t (though I’ve seen some who did). Hmmm? What is an egg spot you ask? Oh yes, more Chinese :)). OK, an egg spot (not egg roll!) is a tiny white speck, like a grain of salt, located under the female’s belly, between her ventrals and her anal fin. The spot is none other than the ovipositor tube, which the female drops during spawning, and out of which the eggs will come out (or so you hope :) ). Sometimes young males have an egg spot (just to confuse us further :P ), but usually they don’t, especially when mature.

Males have more beard. (some females do too, but they usually wax it) (oh, just kidding you guys!). The “beard” as I call it, is a membrane located under the gill covers. When the betta flares, he opens his covers and displays his membrane.

When the gills are closed, the beard is tucked under, but I have noticed that it usually will stick out a bit, as though it is too big. Now be careful, females also have a membrane (but of course, it couldn’t possibly be simple :) ). It just is not as big and usually will not stick out when the gills are closed. Below, see a close up of what an ‘Apache’ male’s beard, “sticking” out, looks like.

Males blow bubble nests. (hopefully :) ). Females don’t. If you are unsure of a betta’s sex, you might want to jar it. If it blows a nest (see photo below) a few days later, then it was a male. If it doesn’t, it could still be a male who just is too darn lazy for his own good :). 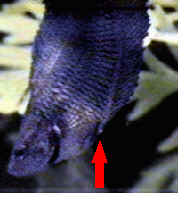 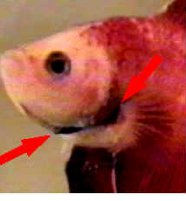