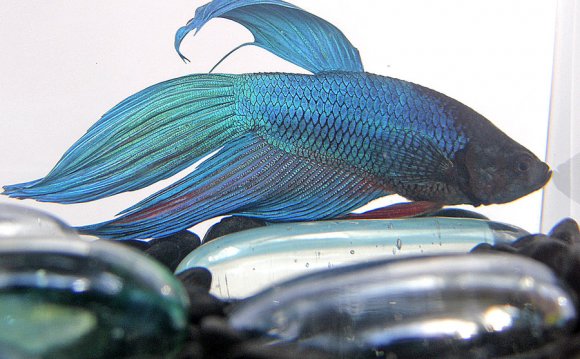 Onset of air-breathing in larval amphibious fishes represents a distinct developmental landmark and thus an ideal process to investigate heterokairy (intraspecific plasticity in the timing of the developmental events). We have determined the effect of hypoxia on air breathing onset and physiological and morphological characters in larvae of the Blue Gourami (Trichogaster trichopterus) and the Siamese Fighting Fish (Betta splendens). Larvae were exposed intermittently (12/12 h daily) to 21, 18, and 15% O2 from 1 to 40 days post-fertilization (dpf). Survival, onset of air breathing, wet mass, mass-specific oxygen consumption (VO2), and critical PO2 (Pcrit) were measured every 5 dpf. Hypoxia advanced by 4 days, and delayed by 5 days, the onset of air breathing in Betta and Trichogaster, respectively. Hypoxia had no effect on larval wet mass in either species, but larval mass at the onset of air-breathing was 28–81% higher than identically aged larvae not yet breathing air. Hypoxic exposure increased VO2 by 50–100% at each day throughout larval development in Betta, but had no effect on larval Trichogaster. Hypoxia increased Pcrit in Betta by 1.5 mmHg, but reduced Pcrit by 1.8 mmHg in Trichogaster. We attribute these interspecific differences to their ecophysiological differences: Betta is a facultative air breather after 36 dpf while in Trichogaster air breathing is obligatory past 32 dpf.