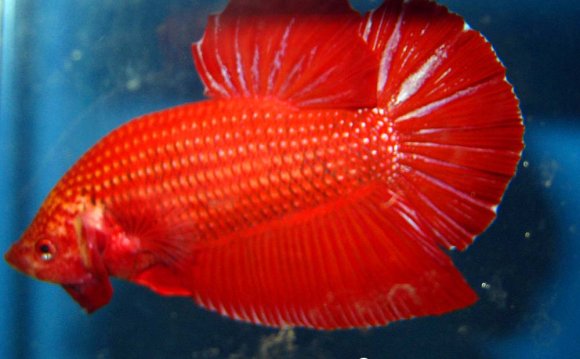 A story of fish fighting in the southern part of Thailand is the most exciting and the most active in Thailand. From my interview to the breeders and suppliers all agreed that, 80 percent of fighting fish bred in Thailand sent to this region. They said that if south players stop to play the fighting fish, theirs’ breeding business may come to an end. Giving the rough picture that, there are 14 provinces in the south region. Each province has around 200 players we will have 2, 800 players. And if each player uses 50 fighters a month, the demand for top fighters is 140, 000 fighters that breeders support to the south players per month. If we multiply by 12 months it will be 1, 680, 000 fighters that south players consume the fighting fish every year (an actual number should higher than this).

Because of fighting fish in the south so popular, the local Government legalized the fighting fish ring by issue the fish fighting license to the person who applies for it. The license has to renew every year and government get paid by tax. The ring is legally open 7 days and active entire year. It may slightly slow down a few months in winter (November – February), traditionally players turn to play fighting cock.

The southern part of Thailand is the hottest battle field of fish fighting; the players also play an important role as a connecting bridge exchanging fighters stock between Thai and Malaysian breeders. Many players in south import the fighter from Malaysia and forward the good fighters to the breeders in central part of Thailand and vice versa, from Thailand to Malaysia.

The factors of popularity:

There are many factors contributing to the popularity of fighting fish in Southern of Thailand.

Fish fighting practice in the Southern of Thailand:

The major income of the players in south of Thailand is from the rubber tree which passed from theirs’ ancestor to theirs’ parents and to themselves. They can collect money from the rubber tree everyday as long as the rubber trees are there. They started to collect the rubber in the very early morning 3 AM and finished theirs’ diary job in the late morning, 8 AM. So they are free on the day time.

The fighting ring started late at 10.00 AM in one of the player house who registered with the local government showing the license on the entrance gate. It can be even in the shade of rubber tree. The player comes to the ring one by one by motorbike or pickup car with the fighters in the round whisky bottle in his old cloth bag. The ring was crowded with players after an hour. The busy matches started after a few minutes when the players show off theirs’ fighters.

A story of fighting wild Imbellis in Thailand began the same way happened in other fighting fish in Indonesia, Betta Smaragdina in the north east of Thailand. The stories were told undated and no record, that the farmer observed the wild Betta fighting in the rice field; that the younger learned from the elder. So he took some of them home, jarred each of them in the glass jar and watching its aggressiveness to the Betta nearby jar. He let the wild Betta fought in the earthen jar as he saw in the rice field. It happened even more impressive than he saw the fish fighting in the open air rice field. Both displayed more aggressive the colors ever darker, they fought even longer period of time. The challenge started from the small money or anything they had in hand. The loser searched the new fighter and challenged to the winner. From one small group spread to the other groups, bigger and bigger, became a cumulative social practice and culture. It is accepted as a challenging hobby for a man in the south region.

The time to play the fighting fish is on rainy season that wild fighting fish easy to find. In the dry season player does turn to play fighting cock. After fought a fighter was freed back to its habitat, just a backyard of his house, waiting for the next year match.