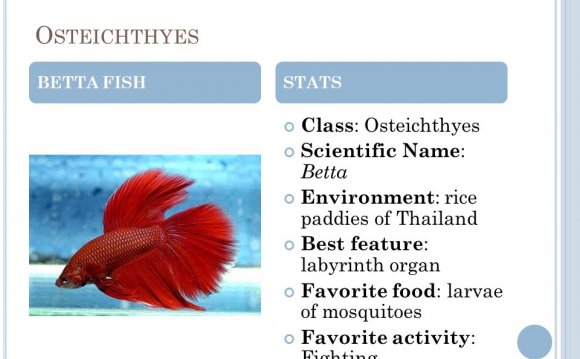 The term taxonomy is derived from the Greek word tassein, which means “to classify” and the Greek substantive nomos, which means law, science. Earlier, the word taxonomy only referred to the classification of living organisms, such as animals and plants, but today the word used more generally and even inanimate objects can be classified according to a taxonomic scheme. This article will however only deal with the taxonomy of fish species.

Take for instance the Siamese fighting fish, a very popular aquarium species. Its Latin name is Betta splendens. This tell us that this fish belong to the Genus Betta according to the fish taxonomy. In addition to the Betta splendens, this genus comprises more then 50 different species. All the Betta species share common characteristics and have a joined evolutionary history.

When we move further up in the hierarchy of the fish taxonomy we can see that the Genus Betta belong to the Family Osphronemidae. The common name for this family is Gouramis. As you can see, your Kissing Gourami is actually a distant relative to the Siamese fighting fish since they both belong to the same family.

We move up yet another step in the hierarchy of the fish taxonomy and find out that the Family Osphronemidae belong to the Order Perciformes. This means that the Siamese fighting fish, as well as the Kissing Gourami, belongs to the largest order of vertebrates in the world. The Order Perciformes include roughly 40% of all the fish species; more than 7000 known species. The name Perciformes means perch-like and the first Perciformes fishes are believed to have originated during the late Cretaceous period.

The Order Perciformes belongs to the Class Actinopterygii, the so called ray-finned fishes. The next step in the taxonomy hierarchy after Class is Phylums/Divisions. All Actinopterygii animals belong to the Phylum Chordata. Chordata includes all the vertebrates and several closely related invertebrates. The common denominator is that all the Chordata species are equipped with notochords, pharyngeal slits, a hollow dorsal never cord and neural tube, and a muscular tail that extends beyond the anus. They do not have to display all these characteristics as adults; the important thing is that they have had them at least during one stage of their life.

The Kingdom for the Chordata species, including our Siamese fighting fish, is naturally Animalia. This is the same kingdom as we humans belong to, together with all the other animals in the world.

The modern taxonomy has its roots in the works of Carl von Linné, but the old divisions are constantly revised as new knowledge is revealed. The taxonomy was for instance adjusted according to the Darwinian principles of common descent. Today, genomic DNA analysis has resulted in a lot of changes and species have been moved to new genera. The fish taxonomy certainly no exception and some fish species have been moved around quite a lot.

So, why care about fish taxonomy? Well, by understanding the taxonomy for fish and how it works you will get a lot of information “for free”. It will for instance be much easier to keep caring rules for a group of species in mind, than to memories how to care for each individual species. You will be able to determine how closely related to different fish species are even if their outer looks do not provide you with any telling details. You might for instance have kept a Percula Clownfish before and you know that this fish was very sensitive to metals. Now you are keeping a Maroon that suddenly begins to show signs of illness and you can’t figure out what is wrong with it. You try to medicate it using cupper, but this does not help. As a matter of fact, your Maroon seems to do worse after being medicated than before. This is where taxonomy comes in. The scientific name for Percula Clownfish is Amphiprion percula. The scientific name for your Maroon Anemonefish is Premnas biaculeatus. Premnas and Amphiprion are both members of the subfamily Amphiprioninae of the family Pomacentridae. Since they are quite closely related, chances are high that your Maroon is sensitive to metal as well. Look for metal contamination in your aquarium and stop any metal based medication immediately. Hopefully your Maroon will perk up as soon as it is provided with metal free water again.

Didn't find the info you were looking for? Register for free and ask your question in our Aquarium forum !
Our knowledgeable staff usually responds to any question within 24 hours

What's in a name - An article about the information the scienitifc name of a fish can give us.
Source: www.aquaticcommunity.com