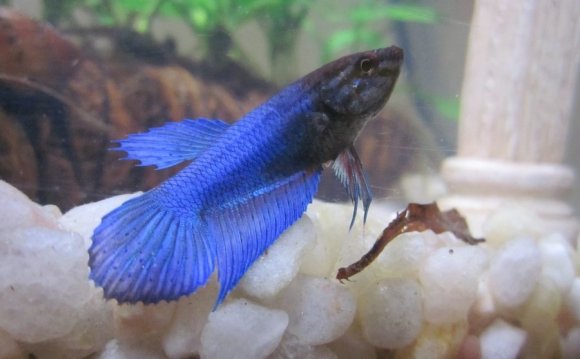 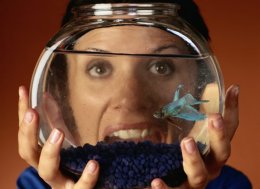 Despite its delicate appearance, the betta is easy to care for compared with other tropical fish.

The betta, or Siamese fighting fish, is native to Thailand. It lives in stagnant water bodies where oxygen levels are low. The betta is a labyrinth fish, which means it has the capacity to breathe under water as well as at the water's surface. The betta is even adapted to live in burrows in the muddy bottoms of water bodies if water is scarce. The wild betta has short fins and isn't as vibrantly colored as a blue veiltail. Brilliant betta colors and long fins are produced through selective breeding. Even among specially bred bettas, the male is almost always more brightly colored than the female, which consistently has shorter fins than the male.

Color in betta fish is expressed through four layers of cells within the fish's skin: the iridescent top layer, the red layer, the black layer and the yellow layer. In a wild betta, none of these layers is more prominent than another. In a blue veiltail, the top layer of cells is more concentrated with iridocytes, or iridescent pigment cells, so these cells appear as a shimmering blue. The fish's genes control how much of each pigmentation is present in each layer of cells, as well as the shape of its tail. A veiltail has a long, flowing tail that droops - the most common type of tail among non-wild bettas. A veiltail crossed with just about any other tail type will produce veiltailed-offspring, as will that offspring's offspring. This means the veiltail gene is highly dominant.

Blue bettas are further divided into turquoise, steel and royal blue. The concentration of iridocytes determine which color the fish will be. The turquoise and steel bettas have moderate iridocytes. When a steel betta and a turquoise betta are crossed they produce a royal blue betta. The royal blue betta is the most richly-colored of the iridescents because it has the most iridocytes. Because the gene for iridocytes is so dominant, when two fish with moderat iridocytes are crossed their offspring have even more of these blue pigment cells. Bettas that appear purple are actually considered royal blues.

Because little selective breeding is required to produce blue veiltails, they're usually hardy fish - as long as they come from a pet store or breeder that maintains good breeding practices. A blue veiltail needs clean water and a container of at least 2.5 gallons, but larger enclosures are preferred as long as the fish is provided with hiding places throughout. A wide, long aquarium is better than a tall one for a betta, and a covering of some kind is recommended because they're accomplished jumpers. A strong filter isn't recommended because it can damage its delicate fins. Although the betta can tolerate a pH range between 6.0 and 8.0, try to avoid rapid fluctuations in acidity to help keep your fish healthy.