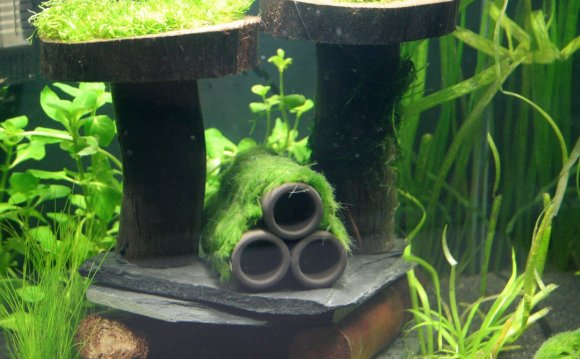 Often I see people being offered very, very wrong information about their betta fish and I find it's absolutely deplorable - these creatures require just as much care as other fish, even if they're hardier.

1. "Betta fish do not need a heater" - This is a myth. I'll be honest, for the most part betta fish CAN survive in temperatures around sixty...but they are tropical fish and do not thrive in cold temperatures. If you keep your fish room around 75 you can forgo a heater, but otherwise it's strongly reccomended that you provide your betta with a heater.

2. "Betta fish like small spaces" - Absolutely, positively false. And I've tested it. I have tried a betta in a 1/2 gallon tank, then a 1 gallon, then a 2 gallon, and then a 5 gallon. Guess which tanks he was the most active and enthusiastic and interactive in? That's right - the 2 to 5 gallon tanks. Betta fish do *not* live in puddles; they live in rice paddies which contain several thousand gallons of water, they do not live in puddles unless it's during a drought and in that case the fish is very likely to perish. I can't stand seeing little 1/4 gallon tanks being sold. And that brings me to divided tanks...they look very neat, and save space, but ammonia builds faster and these fish are *amazing* at getting from their side to another's side and fighting. So I'd suggest steering away from that as well.

3. "Seperate the males, females can be kept together" - Oooo, almost! Yes yes YES, seperate the males at all costs! They WILL fight and they will KILL. That is their nature, they're incredibly territorial. In the wild if one hopped into another's area, they would fight until the loser leapt into another puddle ... in a tank they don't have that option so they will fight to the death. Males cannot be placed with females either, except for the purpose of breeding and in that case only for a short time. Females *can* be kept together, but not on a one-on-one basis which I've seen suggested a lot. Females need at least a 10 gallon tank, with at least six kept together. The more females together the more aggression will be diffused among them. Females are just as aggressive as males and sometimes the female tank will end up having to be broken up. Just two females in a tank will fight just as males do, with three they will gang up on the weakest one, four and five are plausible but they'll still be very aggressive and nippy. Six is the optimal minimum - besides, the more females the better. A good rule is one female per gallon in a female tank, it seems to work better (therefore the maximum females allowed in the 10 gallon would be ten).

4. Feeding. Bettas do not like flakes - they will as a general rule probably not eat them. So don't bother. The better the diet the healthier the fish. Purchasing a good pellet (nothing with the word 'betta' in it, those are all useless as most bettas hate them) and feeding a few daily along with some bloodworms (preferably frozen but freeze-dried will work if you put the amount you want to feed in a bowl of dechlorinated water for a few minutes and let it expand before feeding), perhaps some brine shrimp as a treat...the fish will be very pleased. Switching up the diet will keep them from growing bored with the food (although bettas still adore food, quite a lot...don't be swayed by the wiggling, if they've gotten their daily feeding don't give them any more - they are master con artists). A good rule of thumb is if you put the food in and they scarf it down, put a little more in and continue to do so until you notice they are beginning to nibble more than attack. Then they've had enough to eat.

5. Water changes. If you ever read something that says 'once a month' ... do not listen. Ever. NO. Even if your tank is fully filtered and cycled a MONTH between cleanings is outrageous and the ammonia levels will be ridiculous, not to mention the tank will be filthy. In an unfiltered 1/2-1gal at least every three to four days is a good water change time. In unfiltered 2-5gals once a week. For a 10+ you are going to want to filter it, since the "water changes" I'm referring to are 100% changes and it's VERY difficult to do a 100% change on a 10gal and therefore it's easier for you to have the tank filtered and cycled, then you only have to vaccuum the gravel every two weeks.

6. Cycling. What is this? Haha. You are going to want to purchase a filter, fill the tank - NO fish. With the filter running you add ammonia until you get a reading of about 6.0ppm. Let it drop down to 0 (this will take QUITE some time, at least a week). At that point bring it back up to 4ppm, and let it go back down. Continue raising it to 4ppm until it goes back to 0 within twelve hours and the Nitrites are at 0 and Nitrates are ridiculous. At that point (this will be about two weeks later) you can do a 90% water change and have a wonderful tank ready to be stocked (gently) with fish (in the case of a female tank (otherwise known as a "sorority") put all of the females in during the same day about 10 minutes apart).

7. Lifespan. Betta fish can live up to five years, I believe that's the current record. Really! They can flourish and everything. The problem is that most people purchase pet-store bettas instead of bettas from professional breeders. Getting a betta you know is at six months of age is totally different from a petstore fish. Not to mention full finnage puts a betta fish at about two years anyway - therefore if you have a petstore betta you already have a fairly old fish and the lifespan only has a few years left, if the fish wasn't very mistreated earlier in its life. I just wanted to clear that up, as a lot of people think bettas shouldn't live for a long time when in all reality they *should*.