Bettas in the Wild 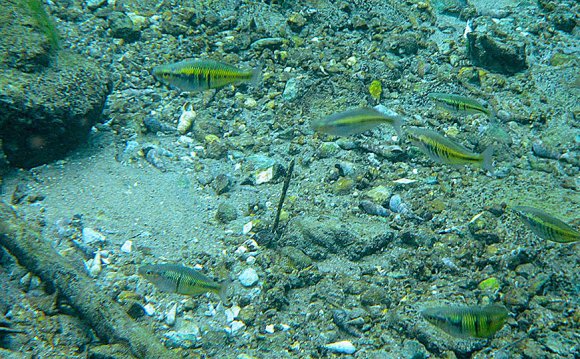 Does the harvest for wildlife trade or captive breeding of this species harm wild populations?

Little Cause for Concern

Bettas are almost exclusively bred in captivity, and therefore the pet trade does not pose a threat to wild populations. However, wild populations may be declining due to habitat loss, so it is important to only purchase captive-bred bettas.

Only acquire a pet that is from a reputable breeder or dealer to ensure that you are not buying an illegally wild-caught and/or imported animal.

Does the release or escape of this species into the wild harm the environment and/or economy?

Some Cause for Concern

There is at least one record of a breeding population of bettas becoming established in the wild in Florida for a few years only. There are some established non-native populations in other more tropical areas of the world. Although possible in tropical environments, there is probably little risk for permanent invasive populations to occur in most areas of the United States.

Before obtaining any non-traditional pet, check that it is legal to own one in your state of residence and check for permitting requirements. Only acquire a pet that is from a reputable breeder or dealer to ensure that you are not buying an illegally imported or wild-caught animal. Always keep your pet inside a safe and secure enclosure. Never release a pet into the wild.

Does harvest, captive breeding, transport, or being kept as a pet harm individual animals?

Ease of care of many non-traditional pets depends on the individual owner’s years of experience and knowledge caring for a particular species. For the purposes of this website, we have geared information toward the benefit of the beginner.

Bettas are relatively easy to breed and keep in captivity. They do well even in small aquaria. Males are aggressive and should not be kept with other fish. Bettas also need warm (78º–80°F), still water (fins can be damaged by vigorous currents). They are very sensitive to chlorine, so tap water should be treated with a chlorine and chloramine remover (available at pet shops) prior to use. Take care not to overfeed because uneaten food can rapidly foul the water.

Before acquiring a betta, be sure to research its specific care requirements. For example, bettas typically require freeze-dried tubifex worms. Although bettas are commonly sold in small bowls, PetWatch recommends keeping bettas in larger aquariums with live vegetation that reaches the surface to simulate their natural environment.

Does this animal pose a health risk to native wildlife, humans, livestock and agriculture?

Bettas may carry nematode parasites and certain bacteria (Mycobacteria species) that can cause disease in fish and infrequently skin infections in humans. Even healthy-looking fish may be infected by these bacteria. People with compromised immune systems are more susceptible to these skin infections, commonly called “fish-handler’s disease.” Bettas can also carry Edwardsiella bacteria which can infect commercially important farmed fish such as catfish, salmon, trout, and tilapia.

Due to the potential for disease transmission to humans and other household pets, always wash your hands after handling a fish or touching the aquarium water. When purchasing a pet fish ask the seller if the fish or group of fish has a history of any health problems and for a list of any medical treatments the animal or tank has received.