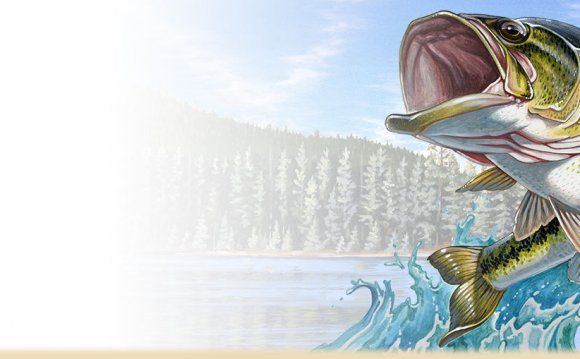 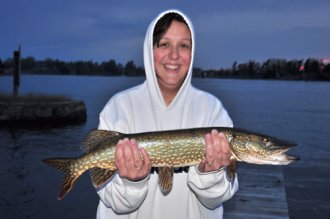 Northern pike spawn in the spring when the water temperature reaches at least 48 degrees Fahrenheit. As the female spreads her eggs on vegetation in water no more than a foot deep, the male fertilizes them. Typically there are between 15, 000 and 75, 000 eggs. After the sticky eggs are attached to the submerged vegetation, the male and female both leave. The eggs hatch after about two weeks. The newly hatched “fry” feed on their egg sack until it is gone and then switch their diet to zooplankton. After about two weeks, they begin to feed on small fish. Pike grow most rapidly during the first two years of their life. Sexual maturity is reached between ages 3 and 5, with the males reaching this point earlier than the females of the same age. The average lifespan of a northern pike in the wild is 7 years.

Northern pike seek areas of dense vegetation in streams, lakes, and large rivers. They tend to occupy the shallow waters near the shore with covering. They prefer cool water, and therefore will head to the deeper water around midsummer.

What Do Northern Pike Eat?

Pike are carnivorous fish and consume a large amount of food each day. Their diet consists mainly of fish that are smaller than them but they also eat other creatures like frogs and waterfowl. Pike lurk in the vegetation, making no movements, just waiting for a creature to get close enough to strike it. Pike are not picky with the species of fish they go after; they will eat just about anything smaller than them.