How To Breed Bettas? 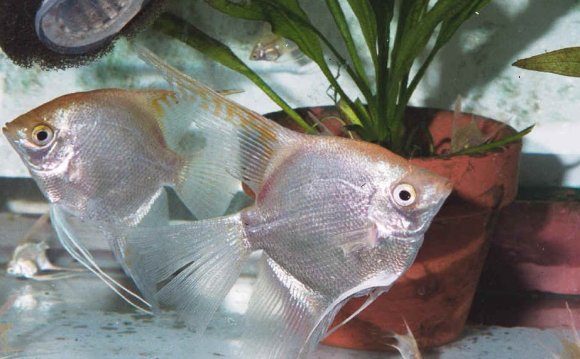 My girlfriend, Marianne and I live in Urbana, Illinois. For several years I worked in a pet store, but only dabbled with fish breeding. We started breeding Bettas in June of 1994. What started as a pastime, has now become a full blown MANIA!

To the question, "How hard is it to breed Bettas?" We seem to think that the most difficult parts are, carefully watching the breeding couple from mating until the eggs hatch (usually about 2-3 days), and being diligent with live feeding of fry until they can eat other foods. We generally introduce a pair on Thursdays, by Monday night there are fry. Of course, you must be prepared to spend a lot of space and time if you do want to raise young to adults.

Though I do not claim to know everything about this wonderful hobby, I thought some would like to know how our system works. First, let me describe the fishes containers.

Our breeders are kept in 2 1/2 gallon tanks with dividers. Some are in Mason jars until ready to breed. (I've bought about 200 quart jars, all at garage sales, for less than $10!) Juvenile males are currently also living in one quart jars. Fry are transferred to 5 1/2, 10, or 20 gallon tanks at around six weeks old. Plants are placed in most all containers. This seems to keep them from jumping out (early on we had a couple of suicides), stimulates practice bubble nests, and gives small fry a place to hide. We use Java fern the most, but also find riccia and tiny watersprite, and salvinia are useful. Anacharis is good for the juveniles as well. We are also trying giant duckweed. All are easy to reproduce and deal with during water changes.

Temperature of the water ranges from 76-82 degrees Fahrenheit. Warmer temps do increase spawning activity and speed up egg hatching! We haven't monitored our pH in over a year, so perhaps we are lucky, the tap is slightly high. We change all of the water in the quart jars once a week. (some times as many as 200 jars!). Fry tanks receive only slight water changes, only to remove build-up on the bottom. Juveniles get a 50-60% change weekly. Oh, by the way, we don't use any gravel at all, it makes cleaning tough, and traps some live foods. Aeration is used only in the tanks for the young, not for the adults or fry. We have only rarely had trouble with infection or disease, but have had a few set backs due to water chemistry.

Remember, there may be many ways of getting the job done, ours is just one. Most of our males will build nests immediately after water changes. They prefer putting them along a side of the container, or under and around the floating plants. We introduce a female in a partitioned tank (2 1/2 gal.) or just next to the male, in a jar. (We can now recognize when a female is ready to produce eggs). He will go about an aggressive display, flaring gills, etc., and continue adding bubbles to his nest; she will get vertical stripes (its harder to tell with white or pale females), move her fins rapidly, and swell with eggs. The initial compatibility should be evident within a 2-12 hours. At this point we introduce the two and cover the container. She will either accept or reject his bubble nest in 24-48 hours. If she rejects it, she will sometimes attempt to destroy it. If this happens, we will take her out, do a water change and wait for him to build another nest. If she accepts the nest, They will go through a courtship "dance" of nudging and twisting, dropping eggs (25-200) and semen to the bottom of the tank.. Warning! This is usually very rough on one or both partners (usually the female), and even fine specimens can become tattered or injured This is unfortunate and sometimes heartbreaking, but fairly common. The male will take the eggs and place them in the nest, guarding and protecting them. When it appears that she is no longer dropping eggs or seems disinterested, we take her out. The male will continue to care for the nest and eggs. He picks up eggs that fall to the bottom and moves others around. A good male is extremely good about this. We have noticed that some males are better at this than others and that they sometimes get better with subsequent breedings. Occasionally we get males who will eat their own eggs or fry. We remove them as soon as we notice this behavior. Under normal circumstances, we will leave the father with the fry until they become horizontal and can swim on their own (about 3 days).

The eggs will hatch between 24-36 hours after being deposited. The fry drop to the bottom, and are picked up by their father and placed back at the surface. Remove males who are not good parents. If he eats the eggs or newly hatched fry, remove him and lower the water to about 1". The fry remain at the surface of the water for approx. 1-2 weeks. The first few days they will be vertical at the surface, but will begin to swim horizontally within about a week A good father will help them back to the surface if they fall We remove the father as soon as the fry swim horizontal. We start feeding infusoria at two days old, though most don't seem to eat until 3-4 days old. At about 5-7 days old we feed live baby brine shrimp. (Thank goodness Marianne has been so diligent with our shrimp hatchery!) The tank is kept covered with Saran Wrap and a small glass top or just a rubberband and plastic. The high humidity is necessary for the development of the labyrinth organ. They are kept covered for 4-5 weeks, during which they will begin to move about the container. Some fry will begin to show color by the 5th week. At 5-6 weeks the fry are moved to a larger tank, depending on the number either a 5 1/2, 10, or 20 gallon.