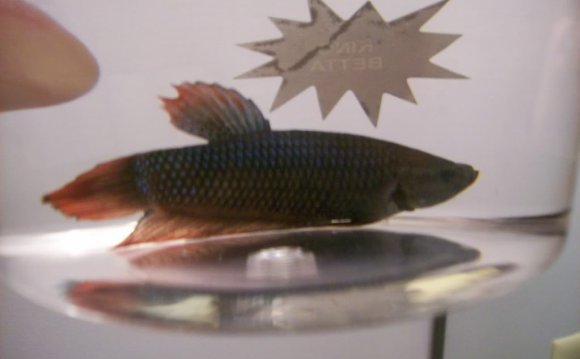 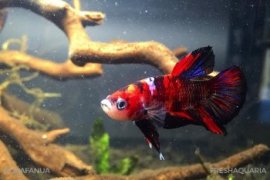 The betta, or mostly commonly known as the Siamese Fighting Fish, is a fish that is naturally found in the rice pads of Thailand. They in part get their nickname due to the fact that having multiple (or any species of fish that is within the anabantids grouping) fish will make the fish be highly aggressive with the other and fight till one of them normally dies from stress or damage. Many people have been very successful in creating a female sorority where the females will harass each other, but will spread the aggression amongst them allowing for one to never get too hurt or too stressed. Due to the river's flow these fish have developed a very remarkable organ (called the labyrinth organ) to allow for them to breathe either through their gills if enough water current is present, or breathe directly from the surface of the water.

Commonly bettas are sold in small little cups around the world while many stores will claim that they can live within less than a gallon of water, or that they do not need any form of heat or filtration. Sadly these are all very inaccurate and will lead to a premature death (or a very slow death) for the fish to go through. Although they may seem to tolerate being within a small environment, they will never show their true coloration due to stress. All anabantids (bettas, gouramis, and paradise fish) will require access to a fresh supply of air as they are still required to get a small gulp of air every few minutes in order to keep their labyrinth organ working properly.

The betta fish can be breed somewhat moderately, although you must have separate containers as leaving the female and male together for a period of time will create an aggressive environment (even right after they have spawned). The male Betta will first build a bubblenest at the top of the water's surface in a calm section (bubbles that will stay there for up to a week without popping, and may include plant leaves) in order to place the eggs once the female releases them. He then will wrap his whole body and fins around the female while they start to sink towards the bottom. Doing so, the female will release eggs into the water column with the male also now releasing his own sperm into the water. Once the couple has made it almost half way down, they will separate while the male collects the eggs (he will either eat them temporarily or take each one and place it into the bubblenest right away) and then continue to repeat this until the female no longer cares for the male. Once this occurs, it is recommend to remove the female right away as the male will care for the bubblenest until the fry start to hatch within 24 hours. When it gets close to the hatching hours, we suggest that you remove the male Betta so that he cannot eat any of the fry swimming fry.

Bettas are known as one of the pickiest eating fish, as they will go up to a few days without eating if the food does not taste correct to them. Due to them being carnivores by nature, it is strongly suggested that their diet consist of meaty foods. Most will accept pellets, live or frozen food, however some will also accept flakes depending on each individual fish's personality.