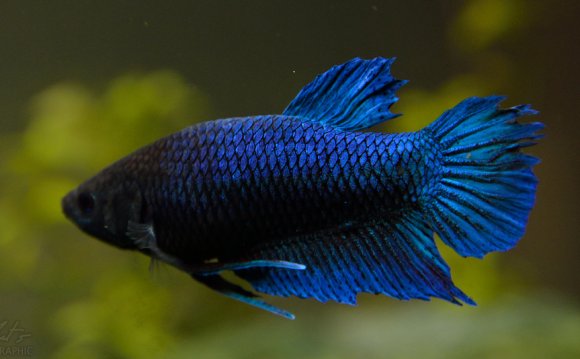 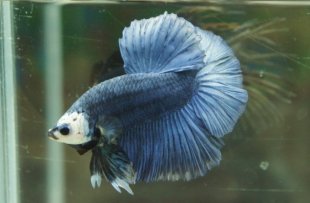 So what are the differences in males and females? Is one gender a better pet than the other? Is there a specific benefit to owning a male instead of a female, or vice versa, if their behaviors aren’t as gender-unique as we once thought?

The answers to these questions comes down to understanding the fundamental differences between the genders.

The traditional image of a male Betta splendens imbedded into the minds of most people is a brightly colored, traditionally blue or red, long finned veiltail with a flaring temperament. This image is commonly associated with Betta fish specific products and in advertising. Thanks to rising popularity of alternate fin types and breeds, it is now not uncommon to even picture a long-finned crowntail or even a halfmoon of a bright color isolated from other fish due to an aggressive nature.

Short finned males who are more similar to their wild counterparts are easily located on the shelves of many North American pet stores now, known as the plakat (pronounced PLUH-KOT) variety. Sometimes you come across the confusing combination of a pale plakat Betta splendens and discover that although it is indeed male the store has mislabeled it as female! (And lucky you—females often sell for less than males due to this stereotype). To add to the gender-identification confusion, not all males are aggressive. Some female Betta splendens can be more aggressive than males in some cases. 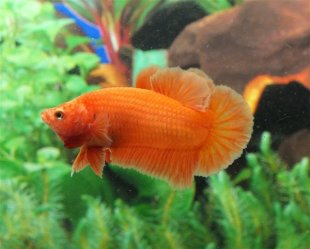 So if color, fin length, and temperament aren’t good indicators of gender, what is?

Because adult Betta splendens are the easiest to sex, this article will focus on them. Take a look at a typical male Betta splendens of any fin type or breed. Remember: color and fin length are not good indicators of gender so it is important to look at unique features to the gender. Here is a quick reminder of basic Betta fish anatomy.

While both genders have the operculum (gill cover), only males show a thin skin-like layer called a membrane when they flare. All Betta fish have this membrane in between their operculum and gills but the females’ membrane is so small it often does not appear when the operculum is pushed forward.

The visual presence of a membrane is not the only difference in how males and females flare either. Male Betta splendens, though not all in every situation, have a habit of turning their heads and bodies at a sideways angle when flaring. This aggressive display is a dominant behavior that usually occurs before a fight. Females who flare have a tendency to lower their heads when pushing their operculum forward but this submissive stance is more commonly seen during breeding, so keen observational skills are needed to identify this behavior if it is demonstrated at all by the female.

Another common identifier is the visual presence of an ovipositor—the Betta splendens equivalent of the ovaries, in a sense—which is a tube that releases eggs. This end of the tube appears as a white dot under the abdominal region near the pelvic fins and is hard to see, especially in young females. Females do not only release eggs when breeding either and may eat their own eggs as a source of protein when kept by themselves or within sororities. Seeing this behavior is the best confirmation that a Betta splendens is female because, like all thing betta, a visual egg spot is not always a guarantee of the female gender. 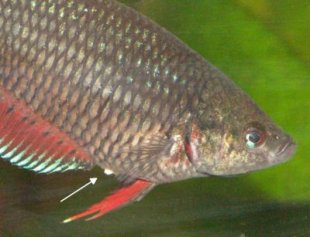 Male Betta splendens may show an egg spot but they do not have an ovipositor. The presence of the egg spot on males is rare but not so rare that the International Betta Congress, a group dedicated to Betta fish breeding and shows, has deemed it a disqualifying characteristic in their shows. To make matters even more confusing, a plakat male may show the egg spot while a long-finned female may have hers hard to find. This factor often contributes to why male Betta fish are sometimes mislabeled as females in pet shops only to surprise their owners when they aggressively attack the sorority they have unfortunately been placed in, much to the safety hazard of all parties involved. One indicator involving the ovipositor area that almost always confirms the female gender is the swollen-like appearance to the abdominal area that the egg filled ovipositor is located in. This can only be truly assessed as a present ovipositor, however, if this is a consistent presence in a healthy Betta splendens rather than a sign of illness such as swim bladder disorder, bloat, constipation, dropsy, or parasitic infection, which can occur in either gender and affect that general area’s appearance in size.

Finally, and perhaps most usefully, is the difference in male and female body size. The majority of the time, a male Betta splendens of any fin variety or breed will have a longer body and longer ventral fins than females. Male Betta splendens also tend to have a differently shaped body from females. In comparison, females tend to have shorter and rounder figures than their male counterparts. This comparison is really only useful for fully grown fish, though, as fry may mature at different rates.

So while the traditional dull-colored, short-finned, females are still around, do not assume that they are all female. It is entirely possible for males to be dull and short-finned and for females to be bright and long-finned. Remember the key signs to look for: operculum membrane present when flaring, presence of an ovipositor, and body length/shape. And if you ever feel confused or frustrated over not being 100% certain on what gender your Betta splendens is, do not give yourself a hard time. Professionals have the same troubles you do. Gendering Betta fish is tricky and takes practice and patience. Getting to know your individual fish helps greatly not only in identifying whether it’s male or female but also in caring for it on a daily basis. It can take some time but with enough time this can become a mastered skill.