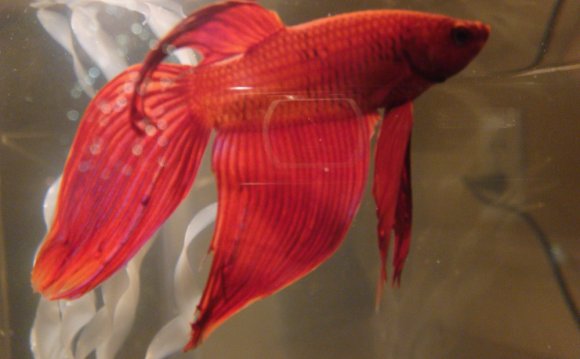 There are many ways to tell of somethings behavior (Scientifically or Educational Guessing). However fish tend to be one of the hardest animals to know if they are "Happy", "Sad", "Funny", "Angry", "Aggressive", "Passive-Aggressive", and/or "Peaceful" or "Charming" (or what we'd like to call "Emotions or feelings"). There are three major ways to detect if your fish is aggressive or peaceful/calm. One is that most animals and fish have health problems. The health problems can be a number of things, from deformation/malformation to puberty (Yes, animals go through puberty or some at least).

I have put some interesting sources you should look at and even though a few want be about fish it does pertain to other animals to. The sources primarily are health related to animals but not just the one's there talking about however the sources give you great idea's to why some animals can be aggressive. Now to solve your problem; there are few indicators to know if your fish is "aggressive" or "peaceful/calm". Some fish's jump out of the water (sometimes jump/leap out of the water violently). Now your dealing with a betta fish that are pretty dangerous and violent despite how small some are. I will quote this paragraph that you placed/mentioned in your question:

"it’s best to avoid adding neons to a tank with a betta who is known to be overly aggressive. As you probably know, individual male and female betta personalities can range from the timid to the outright belligerent. If your betta has a bad reputation you may want to concede to his desire to go solo."

I don't know what site/book/source that was from so i can't say if that's true except for the fact "If your betta has a bad reputation you may want to concede to his desire to go solo.". Don't try to put fish that may be eatable or bothersome fish in there or put one kind of fish in there by itself. However, my gut/instinct agrees not to put any fish in that tank with that betta just because they are fairly aggressive. If you do put some kind of fish in the tank with the betta, try to at-least put the fish in the tank in groups.