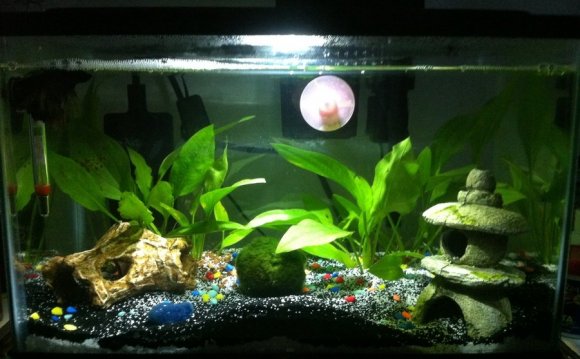 Usually, aquarium fish happily swim and hang out at different depths of the aquarium. Some fish varieties prefer to dwell mostly near the bottom, while others are more inclined to spend their days in the middle or upper regions of the aquarium. One thing you don’t want to see, however, is a fish that is spending a lot of time right near the surface of the water—perhaps gasping—and in apparent distress.

A fish may linger near the surface because he’s trying to breathe more easily. Remember, fish breathe dissolved oxygen—not oxygen that is already combined in the H2O molecule. Naturally, these dissolved oxygen levels tend to be higher near the surface, where interaction between air and water takes place. A fish that is not receiving enough oxygen will try to compensate by gravitating toward that area. Similarly, you may notice your fish lingering near the bubbles of your air stones or other bubble-producing décor.

An individual fish might not be getting enough oxygen because of a problem with his gills, such as gill flukes, parasites or injury. However, if you notice that multiple fish are trying to breathe at the surface of your aquarium, then it's likely that something is wrong with the conditions of your habitat:

Begin your troubleshooting process by performing a water test to rule out any issues with water quality (such as temperature, ammonia, nitrite, nitrate, hardness, salinity levels or pH levels). Next, try to determine other reasons your aquarium may be lacking oxygen. For example, if the water is cloudy or polluted, you may be overfeeding your fish, or you may have a dead fish in the tank. In either case, you will need to replace as much water as is needed to bring your tank conditions back into a healthy balance (typically up to one-third of the water is recommended).

An overstocked aquarium—with too many fish polluting the water and competing for the same air supply—can cause low oxygen levels. For freshwater fish, start with the rule of thumb of "one gallon per one inch of adult fish, " but keep in mind that this benchmark doesn't take into consideration the fact that some fish are larger-bodied and some varieties are more taxing on the aquarium environment than others. Use this rule only as a guideline when calculating the appropriate aquarium size and then do additional research. (Also, be sure to calculate the adult sizes of the fish in your aquarium—not the one- or two-inch juvenile fish that you bring home.)