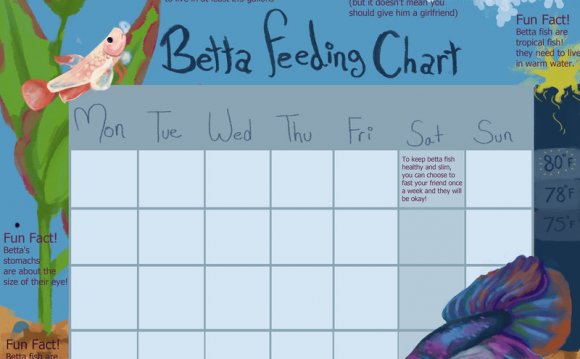 Knowing how to feed your betta is fundamental, because doing it
wrong can have big consequences for your betta's health. Nothing
is more stressful than dealing with a sick fish, right? So, let's
do it right, and not have a calamity!

Here are some golden rules for feeding your betta:

The next rule is to not overfeed your bettas. Carefully dose the
meals; because even if the fish eats all you give him, he will
produce much more waste when overfed, and the pollution level of
the jar he is in will go beyond safe range This problem is
smaller if you keep your betta in a larger aquarium. Remember not
to leave uneaten food in the aquarium! Once your betta and the
rest of the fish are finished eating, you must remove all uneaten
left over food. If you do not remove it, it will soon rot and
cause havoc in the tank.

Bettas prefer to eat from the upper parts of the water column.
They don't really enjoy eating from the bottom of the tank. So
before dropping the food in your betta's tank, make sure you have
his attention. Let him see the food, get it close to his face
from the outside of the aquarium, let him check out what it is,
and then there you go! Drop food in front of his nose. The best
way is to drop a tiny bit of food - about 6 frozen brine shrimp,
watch the betta eat it all and then look at his belly, if it
looks the same as it did before you fed, it's ok to give him
more, but always watch and make sure to make the second portion
smaller than the first.

Your betta should go for the food right away, but if not, watch
where the food sinks, and what the betta does. If after 15
minutes he has not eaten the food, remove the food. Never let the
water go cloudy. If it is already cloudy then change it, as
cloudy water will threaten your betta's health. Normally, small
bowls or containers should have water changes at least twice a
week. Larger tanks can be changed once a week. And notice if the
ammonia and nitrite levels are at high levels, because both are
very bad for your betta. Also be wary of harmful bacteria - they
can ruin your fish's life, but don't kill off all bacteria in the
aquarium since bacteria is essential for a well functioning
aquarium.

During the pre-spawning period you can feed a wide variety of
foods, including blackworms, grindal worms, fruit flies, brine
shrimp, mosquito larvae and frozen bloodworms (all are live
except the frozen bloodworms). During this period the adult fish
may be fed 4 times per day or more depending on how close the
fish are to being placed into the spawning tank.

You can start feeding your betta fry 5 days after the hatching.
Feed the fry several times per day, using a variety of foods
(infusoria, boiled egg yolk, baby brine shrimp) made up of small
particles.

Article by William Berg writer for Aquatic Community with more