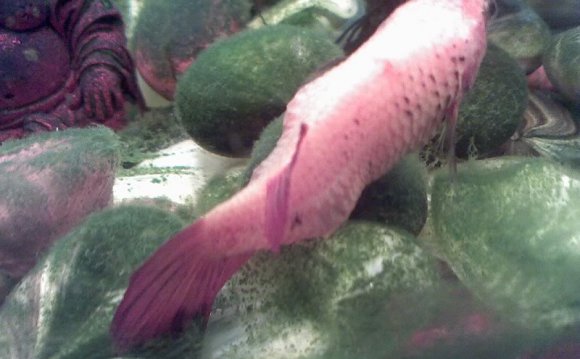 When fish can’t swim normally, many aquarists assume their fish has something called swim bladder disease. In fact the swim bladder is rarely at fault, and problems with swimming are more often to do with other, less obvious reasons.

If newborn livebearers such as guppies aren’t able to swim at the surface, then the problem is very likely genetic or developmental. Nothing can be done to help such fry, and euthanasia is recommended. Fry that hatch from eggs may spend one or more days as ‘wrigglers’ at the bottom of the tank before they start to actively feed. Once the wriggler stage has passed, fry should be able to swim off the substrate without problems, though perhaps weakly at first. Again, those fry with deformed swim bladders cannot be treated, in which case euthanasia is recommended. Swim bladder deformities are commonly seen among the offspring of species that have been routinely inbred, such as convict cichlids. But even genetically healthy stock can produce fry with swim bladder deformities, especially if diet and aquarium conditions are not adequate.

In some cases, the swim bladder has become deformed in the process of breeding ‘fancy’ varieties of fish. Blood parrot cichlids and fancy goldfish are examples of this, and while adults may swim properly when healthy, constipation and physical injuries affects them more severely than normal fish. Prevention is key here; the fishkeeper should take care such fish enjoy a fiber-rich diet and aren’t housed with boisterous or aggressive tankmates.

Sudden exposure to environmental changes can make fish go ‘loopy’ for a while. Such fish show all the symptoms of swim bladder disease, swimming poorly or at odd angles. Adding very cold water to a tropical aquarium is a classic way to shock aquarium fish. There’s no treatment as such, and if the fish can recover, they will do so given a few hours. Switching the tank lights off for a while often helps, partly by removing one source of stress, but also by encouraging the fish to rest quietly rather than try to swim about.

Cichlids and other species that engage in fierce territorial disputes are very prone to swim bladder injuries. There’s not much that can be done to speed up recovery beyond isolating injured fish in a hospital tank of adequate size. Obviously the fishkeeper will also need to make sure such problems don’t reoccur (or happen in the first place) by choosing livestock carefully and stocking at sensible levels for the size of the tank.

Various parasitic worms can infect aquarium fish, but on the whole they tend not to cause too much trouble. But in extreme cases the sheer mass of worms inside the gut can make it difficult for the fish to swim properly. Treating with an antihelminthic medication will be necessary.

Despite the widely-held belief that bacterial infection of the swim bladder is one particular disease, in almost all cases infection of the swim bladder is actually part of a larger, more systemic infection of the fish. By the time the fish loses its ability to swim, it will likely be very sick indeed, and treatment is extremely difficult. Standard antibiotic treatments may work, but it’s dicey. Small fish will likely need to be euthanized at this point, but larger fish can recover, and valuable livestock like koi will definitely benefit from veterinarian advice.

As indicated above, there’s no one ‘swim bladder disease’ against which a single medication can be recommended. Bacterial infections will need to be treated one way, worm infections another, and physical injuries a third. Surprisingly perhaps, exposing fish with swim bladder problems to warmer water can help. The fish should be transferred to an adequately large Hospital tank filled with water from the main aquarium to minimize temperature and water chemistry differences. The heater in the hospital tank can then be set up to 9 °F above the temperature of the main aquarium, but care should be taken before doing this. Some species are extremely sensitive to warm water and the lower oxygen concentration it brings, in which case a smaller temperature change within the known tolerances of those species is recommended instead. As well as slightly warmer water, the lower water level can be beneficial too, but the waterline should be a few inches above the height of the fish so that there isn’t any risk of it being exposed to dry air.