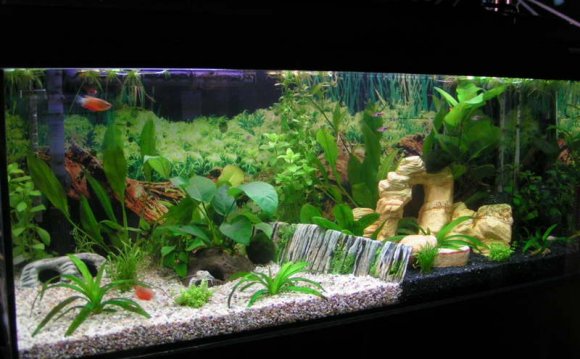 Female Beta Fish love fish bowls, the bigger the better, such as our 1.5 gallon bowl. Click here for more about buying a Fish Bowl Kit from us. Always keep fish bowls away from sources of hot and cold air such as heaters, heater vents, cold or sunny windows, drafts, air conditioner vents, etc.

A Female Beta fish will do well in a large fish bowl or several Female Beta Fish can live together in an aquarium.

You should also be sure the temperature doesn't change too often, or too quickly. A change of 3 degrees per day usually doesn't cause stress or disease, but a drop from 75 degrees to 65 degrees in one day would not be natural or good for a Beta.

Female Beta Fish are not usually active fish, so they don't require as much oxygen or as much food most fish do. Be careful not to feed your Female Betas more than she will eat. Remove uneaten food with a small net after 10 minutes.

Before Female Betas will fill with eggs and be ready to breed, they need lots of rich food. In addition to the food mentioned above, they should also be fed some live Black Worms and some live or frozen brine shrimp.

Keep the Female Beta Fish separate from the male in a fish bowl or an aquarium and feed her lots of live and frozen food so she'll fill with eggs. Betas are not easy to breed but not too difficult either. The fry are very small and rather difficult to raise in aquariums.

Beta Fish can also be kept in aquariums with other fish. Several females can live together in one aquarium; however Male Beta fish will usually fight, if kept in the same aquarium.