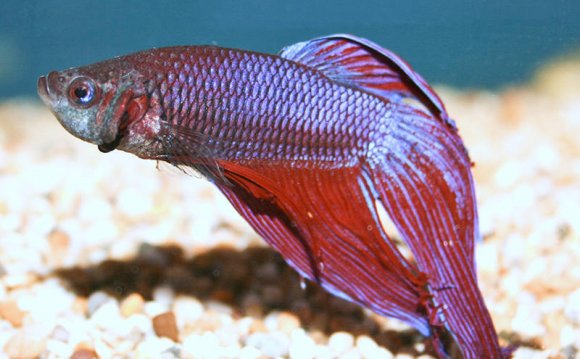 ) is a beautiful and hardy fish, which is becoming ever more popular as the correct and much better choice than the poor Goldfish (Kingyo) to be kept in small home aquariums. Contrary to Goldfish - which would grow to 25+ cm and live over 20 years if they weren't massacred by the thousands still as juveniles, due to being put in those totally inappropriate little bowls - the Betta grows to only 5-6 cm and lives only about 3-4 years, so even beginners and "casual aquarists" can easily keep one very well and for all of its natural lifespan.

However, Bettas suffer from a very common misconception about them, even among aquarium hobbyists: they're reputed (as the common name suggests) for being incredibly aggressive and must be kept isolated. This is NOT true! In general, females are quite peaceful, and males are only aggressive towards other males of the same species (they may even fight to death) and sometimes to fish that look like them, such as dwarf gouramies and paradise fish. Because of this aggression between males, and the fact that Bettas can breath directly from the air, they are kept in those tiny pots in pet shops. But just because they can survive in those pots doesn't mean they enjoy it. Like any other fish, Bettas will be much happier and healthier if they live in a tank which at least allows them to swim around a little. Breeders say that 2 liters is enough, after all, for those who own a lot of male Bettas it gets complicated to keep all of them separated in larger tanks. But for those who own just one Betta at home as a pet, it's a very small extra investment to give him a more comfortable life than his "breeding" cousins, and keep him in a decent tank (20+ liters).

In fact, they make excellent fish for peaceful community tanks, as long as it's well planted, good-sized tank and you keep just one male and/or any number of females. In the community tank, it's the Betta who usually suffers from the harassment of other more active species, such as tiger barbs, zebra danios, serpae tetras and others, who can tear off his long fins and force him to cower in a corner, even kill him. He also becomes an easy snack for fish large enough to gulp him into their mouths, since he's a slow swimmer, so I emphasize that he's good only for very peaceful communities. I've personally kept them in 200-300 L planted community tanks, where they lived for years and even made bubble nests and bred in there. Obviously, the fry didn't survive and ended up as live food for the other fish, despite the valiant effort of the male to try defending them.

Siamese fighting fish don't fight to the death. If one of the males retreates the other doesn't follow. They rarely die. And if they do it is because their injuries did not heal. After a while you can't even tell they fought.

I have been keeping fish for over 12 years now, and a betta was my very first fish. Since then I have been immensly interested in bettas, and have since devoted a lot of time in experimenting and breeding different kinds of strains. Fortunately I come from a country where you can even find wild bettas in small streams and big drains, so this gives me the opportunity to closely study them in the wild. Bettas are fairly aggressive and pugnacious fish, not only to their own kind but also towards several other species of fish. My experiments and experience with them has proven beyond doubt that bettas not only attack their own kind, male and male, I mean, but they also tend to attack fishes that are similiar in coloration and appearance to their own kind, particularly other gouramies like the dwarf gourami and lots of other fish as well. I noticed that the betta's temperament with other fish varies with different individuals. Bettas that have indulged in plenty of fights seem to be more aggressive towards other fish in a community tank. On the other hand, bettas that don't always or have never had a battle with another male tend to be more peaceful. Therefore, it is not absolutely safe to include a betta in a community collection of fish untill and unless one is absolutely sure that his or her betta is completely docile and peaceful.

My betta, Gamma, is a beautiful red and purple fish. He was originally kept in a relatively small betta tank. (This drove me nuts.) I moved him into a 15 gallon tank, where he did well, and never touched any of the baby mollies in the tank. Unfortunately, the tank developed a snail problem, and I purchased some (apparently docile) fish to rid the tank of snails. In one night, they also rid the betta of his fins. I put him back in his little tank, he recovered amazingly, and tried to relocate him into a 25 gallon with only two other fish (closely watched, but both other fish were not of the sort to nip fins). He buried himself in a corner and would not eat or move. Strange. After a couple of days, I put him back in his tank. He was fine, ate immediately. We tried this experiment twice, and both times with the same result. Now he resides in a bowl (8" by 8") and loves it. He's got the most beautiful fins I've seen, and I don't intend to try to relocate him again. Although I feel bad that he's in such small quarters, he won't have it any other way.

I decided to set up a betta tank, and having only ever kept single males before I asked the LFS what tankmates I could have. The guy suggested 3/4 females and 1 male. So OK I thought, chose my fish and went home and let them swim. Things were fine for a number of weeks, until I noticed during the night that 3 of the dull looking females and the male had been nipped, thinking it was just male/female tension I didn't do anything. Then I noticed the male and one of the females facing off! The female over the last couple of days went from dull to getting brighter and brighter. Then they started to rip the hell out of each other. So I split everyone up. Two weeks later and the stroppy female, in a tank of her own has developed into a full blown Plakat male (pic). With female fighter colours getting more like males, just beware what the fishman sells you.

I just wanted to point out that I have no trouble keeping three brother bettas in a 75 liter aquarium. I bred and raised them myself, and the three were raised together in the same aquarium for two and a half years now. If you have raised them as fry and have a well planted aquarium and never show them a female, they can actually live quite peacefully together. I have 24 bettas: four males and twenty females, and I have never had trouble with my boys. LOL, I have more trouble with my quarrelsome females who seem to think that the Cory cave is theirs.