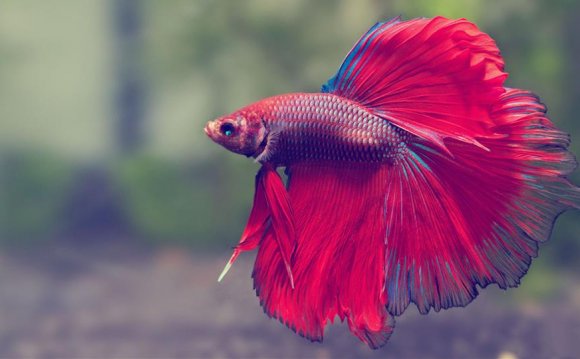 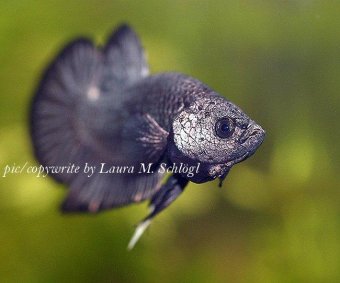 All pictures were provided by Laura M. Schlögl.

Siamese Fighting Fish are one of the most popular and beautiful aquarium fish available. They come in a wide range of colours and the male of the species have long flowing fins. They are also capable of surviving in many different conditions. Many were once sold in a vase with a lily in the top, and you still see them kept in cups and small jars which is far from ideal for the Siamese Fighting Fish, although they will tolerate these conditions indefinitely, however it doesn’t mean to say they are happy! It is never recommended to keep a fish in less than 2 gallons (~9 litres, 2.4 US gallons) of water, which should either be filtered or changed regularly and I personally abhor the practice of “Jarring”, keeping them in 1-2 pints (1/2 – 1 litres) of water.

The name Siamese Fighting Fish came from when they were first used by gamblers in the Far East. They would put two males together and watch them fight, often to the death of one, for money. B. splendens are one of a few species of male fish that will not tolerate any other males in their vicinity. The origins of their aggression are unknown, but it is believed by some to be a natural territorial behaviour. However, through persistent captive breeding, this aggression has been increased to an unnatural level. 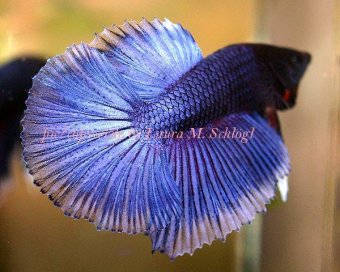 Siamese Fighting Fish originate from the paddy fields, gullies and streams of South East Asia, and are found mainly in Thailand, Borneo and South Vietnam. They thrive in stagnant ponds and slow-moving water. Because of their Labyrinth, a special “lung”, they can survive in water with very little oxygen by coming to the surface periodically to breathe. In fact, they have been known to drown if they cannot get to the surface!

They need warm water, between 75°F (24°C) and 84°F (29°C), but can tolerate a wide range of water alkalinity/acidity (pH), anywhere between 6 and 8. The tank should also have a tight-fitting cover, as Siamese Fighting Fish are excellent jumpers and will often die through jumping out of the water onto the counter. Another reason for the tight lid is to keep the air temperature as close as possible to the water temperature, so that they don’t catch pneumonia by breathing cold air.

Most people would recommend that these males are solitary fish, kept in tanks on their own, and in most cases, this is wise. They can be kept in communities though, with other fish species, so long as care is taken to ensure that there are no small fry, fin-nippers, similar looking fish such as fancy guppies, other male B. splendens or very fast fish in the tank with the Siamese Fighting Fish. You can keep them with betta females, as long as there are several females. These fish are slow movers, (except when stalking or mating), and very susceptible to damage not only from other tank mates, but also from sharp objects or corners on ornaments. Similar looking fish, like the fancy guppy could be mistaken as competition and create problems for you too. 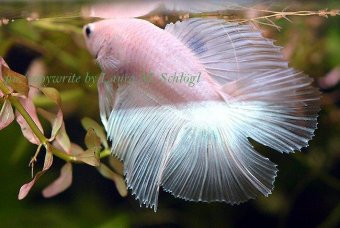 The tank should be well equipped with hiding places, plants, rocks or ornaments, as these fish like to hide and hunt. Live food such as blood worms, cut up earth worms, baby brine shrimp and daphnia are very quickly consumed, and the diet should also include vegetables such as crushed peas, sliced cucumber or aubergine.

Personally I have successfully bred Betta splendens in a community with very little sign of trouble. I consider this to be successful if they can co-exist as a community until 6 months old, when the males are very noticeable. As juveniles, they will flare at each other, but I have not had any fatalities or even serious aggression displayed. Usually one of the males will quickly submit and swim away, doing a headstand to show his submission. Once this happens, the winning male flares and swims away too. At 6 months old, males should be taken out and give them their own space, but still allow them to see other specimens.

Females of the species are usually much more placid, and don’t carry nearly as much finnage. They can exist happily in a community indefinitely, either in groups of 6 or more females, or with one male and a group of females. As with all things, there are exceptions to the rule, so this is something that you need to watch for when putting several Siamese Fighting Fish females together.

Although these are easy fish to breed, it is unwise to do so unless you have the ability to cope with the offspring. Siamese Fighting Fish are “Bubble-nesters”, which means that they build a nest of saliva covered air bubbles on the surface of the water or under a large leaf or similar, and when they mate, the male will catch the eggs from the female and blow them into the nest.