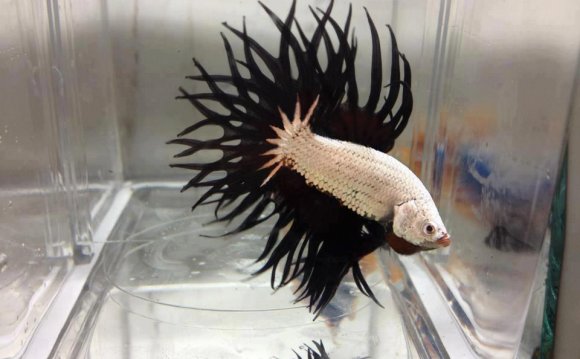 Yes, you can keep more than one betta in your aquarium – but let’s explain!
Most people know or have heard that male bettas just can’t get along. This is true – you cannot keep multiple male betta fish in one aquarium. They are handsome but hot tempered.

Things to know before setting up a betta fish sorority tank

Before setting up a sorority aquarium you must understand the nature of female bettas. We all know male bettas will, let’s say, “get bitey” if more than one are placed in the same aquarium. Female bettas are much more social but they aren’t completely docile.

Female bettas are also territorial and will get into mild “quarrels” as they figure out the personality hierarchy.
The betta sorority should be a minimum of 4-5 females but no more than ten if the aquarium is large enough. Setting up a female betta sorority tank isn’t difficult but there are certain steps that must be followed to have success.

Setting up your betta sorority aquarium

Opinions differ on the minimum size tank for a female betta sorority aquarium. Some aquarists report the best success with tanks at least twenty gallons in size. The fact is this, the smaller the tank, the more likely the female bettas will fight.

Experienced betta-keepers recommend an aquarium size of 20 – 30 gallons. However a 10-gallon sorority can be successful – but you may have to remove a bully female if she won’t settle down and become sociable.

When aquascaping the aquarium (adding the plants and decorations) you should consider plenty of cover and hiding places for the fish. Each betta will select its own territory so adding plants, caves, pots or driftwood will help block the vision between fish – keeping tempers cool.

An aquarium heater and filter is a must. Once you know that the minimum tank size is 10 gallon (with 20-30 gallon being advised) you can follow our aquarium set up guide for further details.

Keep the temperature between 76-80 F.

Clean water is a must – water conditions must be optimal. Choose a filter with a gentle flow. This is preferred by the bettas due to their delicate fins.

When selecting your “sorority girls” try to choose fish that are similar in size and age. This will help the fish feel more equal, reduce the tendency to fight and provide for long-term stability of the sorority.

Some betta experts even recommend buying all of the females from the same spawn to increase chances they will get along. This can be difficult unless if you have a local betta breeder.

All of the fish should be added at the same time. This allows the fish community to establish an order. If new female bettas are added later, the pecking order has to start over again and can result in fighting and damaged fins.

Don’t worry too much about small scuffles during the first couple of weeks. The female bettas will test each other out. There will be nipping and chasing but this is essential for the sorority to establish territories and a hierarchy.

Often the new sorority may not want to eat a lot at first as they will be stressed from adjusting to the new aquarium habitat.

It is important not to overfeed your fish. Betta’s stomachs around the size of their eyes, if they eat too much it will bloat which causes many issues. Plus, any uneaten food will dirty the water.

A new aquarium has to develop a biological filter capable of handling the fish’s waste. Test the water every week for ammonia and nitrite. Both should rise and fall over the next couple of weeks. Once ammonia and nitrite levels are zero, the aquarium is biologically safe. Over-feeding simply boosts the level of ammonia, which increases nitrite and stresses the fish.