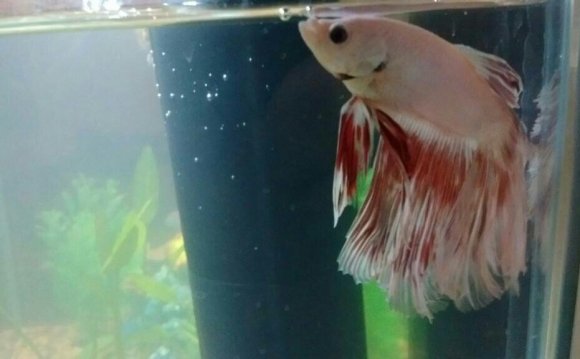 Betta falx being a relatively small species, about two inches and a pair can easily be housed in ten gallon aquaria. Falx can be kept in pairs or in communities (species tanks). Males can be territorial so in a twenty gallon aquarium I would not have more then two or three pairs. Housing of wild bettas has gone through some changes since I first started keeping them. In the days of old aquarists would use gravel and plants thinking they were giving their fishes a natural environment. Most of the wild bettas come from peat swamps, flood plains, or rivers. Most of the mouthbrooders come from rivers that have mud bases and a deep pile of leaf litter. Waters tend to be soft and acidic. To accommodate the wild bettas many aquarists use oak leaves as a substrate. The tannins acidify the water and the wild fish have a substrate that is natural. For some of the more difficult species I would recommend this however falx is an easy species to keep and will thrive in almost any conditions as long as the water is slightly soft and slightly acidic. In the wild falx live in waters that range from 4.7 to 6.8 pH. In the aquaria I use peat filtered water with a pH of around 6.0 to 6.4.

Betta falx is not picky about food and will eat both live and prepared foods. I feed frozen blood worms, baby brine shrimp, and hikari cichlid gold baby pellet. The females are more aggressive feeders then the males.

Breeding Betta falx is also easy. In this species the females initiate spawning and will pick an appropriate male who will either respond positively or negatively. When the male responds appropriately the pair will go through a number of pre spawn embraces, almost like they are trying each other out. These pre spawn embraces may last for hours. When the pair finally does spawn the female will release eggs and then maneuver to pick up these eggs in her mouth and will then spit them at the male for him to hold in his mouth. This process will repeat until the female has been depleted of eggs. Falx eggs are relatively large and thus have smaller broods. The female guards the territory during spawning and her main target is rival females that may try to spawn with her male. The female will also chase away rogue males who enter the territory as well. Falx are best spawned in pairs and the female removed after a few days. If the female is not removed she may fill with eggs and reinitiate spawning before the male has released which will ruin the spawn. I did have a case of this but instead of swallowing all of the babies the male released a few and they spent most of their time hidden in the tank and did not reveal themselves until the male was pulled from the tank after releasing his second batch. The young are large and readily eat baby brine shrimp. The young can reach over a half inch in length in less than a month after release.

Since I received my first few pairs from the “fish wizards” Tony and David, my falx have been spawning non stop. I have to keep the sexes separated to prevent spawning. I have a couple spawns that will be distributed to those joining the Species Maintenance Program when they are old enough in the spring. With their hardiness and ease of breeding Betta falx would do well in any Bettaphyls collection.