Why are fish colorful? 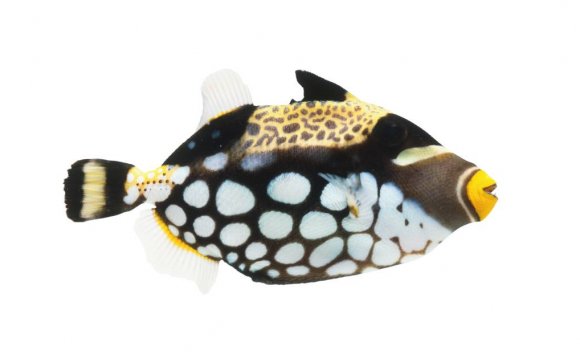 Gil Rosenthal learned to scuba dive in college, and since then he’s never been able to stay out of the water. Like most divers, he’s fascinated with marine life, and how, through the experience of diving, a colorful array of beautiful reef fish — angelfish, damselfish, wrasses, and others — swim all around him. It’s the colors that excite him the most; colors unimaginable growing up in Pittsburgh.

“There’s just this beauty in the underwater world that seems completely gratuitous — it’s striking, ” he says. “We’ve got fish that are called Picasso triggerfish and Koran angelfish. The only words we can use to describe the complexity of their patterns are things that artists and prophets come up with in our culture.”

Unlike most divers, though, Rosenthal does more than just admire. As an assistant professor of biology at Texas A&M University who studies the visual ecology of reef fish, he’s exploring why certain species are so colorful in the first place. “It’s something we don’t, as scientists, fully understand, or come close to understanding, ” he says. “It’s just such a beautiful part of nature that we don’t have an easy explanation for.”

Yet, while there is certainly no easy explanation, researchers have slowly learned some clues to make the mystery less, well, mysterious. It helps to know how fish see in the first place, Rosenthal says. Then, it’s easier to understand why they’re so colorful — in some cases, even more colorful then we can see with unaided eyes — and the benefits colors and patterns have provided different species of fish, as a means of communication, mate selection, and predator avoidance.

What Can Fish See?

The natural starting point for understanding why fish are colorful is to understand how their eyes work. We know how ours work, but we’re not the ones the fish communicate with, hide from, or feed on. So then, we look at the construction of a particular fish’s eye. Then we can figure out what they see, why they see what they do, and how they see it.

Under an ideal set of circumstances, we’d look at a typical fish eye, dissect it, test the retina for its light sensitivity, count its cones and rods — the light sensors that detect color and black and white, respectively — and pronounce judgment. The problem is, there’s no such thing as a typical fish eye, because reef fish do very different things with their vision, depending, largely, on what the fish eats and where it lives.

Fish eyes have evolved to suit that particular mission and need. Consider that squirrelfish and soldierfish are nocturnal, and therefore reliant on only limited light cues. Flounder spend most of their life looking up, while needlefish spend most of their lives looking down. “The way the reef fish sees the world is very closely tied into its lifestyle, ” Rosenthal says. “There’s a lot of variation in visual ability and specialization to different visual tasks.”

Humans have rod cells as well as color cone cells tuned to red, green and blue light. Most small predatory and herbivorous fish have a similar setup, including tangs and angelfish. That visual range contains most of the information the fish need to find little fish, sponges, and macroalgae at dinner time while still enabling good daytime vision, when they’re more active.