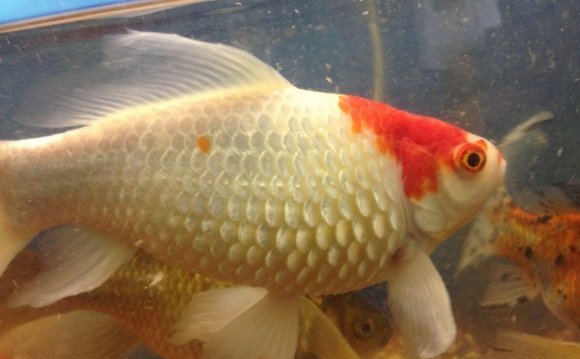 With a gallery of bacterial infections, a discussion of “Fish TB”, and a listing of major antimicrobial medications with examples available to fishkeepers

Where to start?
Recognising that your fish is sick is easy for most aquarists. Knowing what is causing it to be sick can be elude even the most advance aquarist. This is particularly true for bacterial diseases since sick fish often display the same signs for many different diseases, even if caused by different pathogens.
Bacterial disease in fish, just as with other animals, can be successfully treated with antimicrobials. However, in some instances the outcomes are not positive and despite your best efforts your fish dies. Why is that? The goal of this article is to answer that question by giving some basic information on bacterial disease in fish and the use of antimicrobials.

Like all living things, fish are host to a wide assortment of microbes. Fish are not sterile and nor is the water they live in. A tablespoon of aquarium water contains many millions of bacteria.
Fortunately, most bacteria are part of the natural flora of aquarium systems and fish and do not cause disease. Examples include nitrifying bacteria that populate aquarium filters or the bacterial that live in fish's digestive tract. Some, however, can infect fish under the right conditions, typically when the fish is unwell or subject to some type of environmental stress. These are known as opportunistic pathogens.

There is also a much smaller group of bacteria that routinely infect fish and are able to cause disease in otherwise healthy fish enjoying good living conditions. These bacteria are known as primary or true pathogens.

So how do we know when we are dealing with a bacterial infection? During an infection, the fish's immune systems mounts an inflammatory response, some aspects of which are visible to the naked eye and provide clues that a fish is sick.

Unfortunately, the symptoms that indicate bacterial infections can also be caused by other, non-bacterial diseases. Without positive identification from laboratory analysis of blood or tissue samples, you can never be certain of a diagnosis purely based on naked eye observations, and ultimately most diagnoses of bacterial infections are based on a “best guess” approach.
Nonetheless, many signs that are readily observed can be highly suggestive that a bacterial infection is involved, and experienced aquarists will use these, in conjunction with things like water quality tests and behavioural observations, when determining why a particular fish is sick.
Among the more common signs of bacterial infections are listlessness, weakened swimming ability, darkened body coloration and clamped fins, and possible weight loss.

If internal organs such as the swim bladder, kidney, and liver, or in some instances the brain, are affected, swimming may be abnormal or the fish may appear to have poor equilibrium, swimming sideways or erratically.

Very often infected fish tend to stop feeding. If you observe your fish on a daily basis you should have a good idea of what is normal for them and what is not. Essentially, fish should be alert, inquisitive and interested in their surroundings.

External lesions on the skin, fins and eyes are particularly characteristic of bacterial infections. Specific symptoms including thickening of the mucous coat on the scales, creating distinctive off-colour or grey patches; cloudy patches over one or both eyes; ulcers; and either red spots or larger patches. In many cases the ulcers are red with a certain amount of bleeding, though this will usually be preceded by a distinctive raised bump before the wound opens up and becomes bloody. In other instances, bleeding may not be evident, depending on the type of bacteria involved.

Internal bacterial infections are commonly known as septicaemia and many different organs/organ systems can be affected. There are several characteristic external signs to look for if this is the case. Fluid may build up at the sites of infection due to the reaction of cells and tissues to toxins and digestive enzymes produced by the bacteria. When this occurs in the body cavity, fish look bloated and the scales may stand out giving the fish a “pine cone” appearance, commonly known as dropsy or, more technically, oedema (edema in American English).

Fluid commonly builds up behind the eye as a result of bacterial infections, sometimes just one eye, sometimes both. This causes the infected eye to protrude, a condition commonly referred to by aquarists as pop-eye or exophthalmia.

Bloating and pop-eye are probably two of the most characteristic symptoms of internal septicaemia. Bloat in particular often indicates that your fish may be infected with a primary rather than opportunistic pathogen, Such infections can be very difficult to treat because the damage to internal organs is frequently irreversible.

Pop-eye on its own, however, can be a misleading symptom because it is often caused by physical damage, such as a bump, rough handling by the aquarist, or aggression between fish. As a general rule, a single pop-eye usually indicates (but not always) physical damage. Two pop-eyes usually indicate a bacterial infection.

Another common sign of internal bacterial infections are lumps or swollen areas on the body. These often represent the formative stages of ulcers and granulomas. Granulomas are a particular type of lesion associated with certain species of bacteria that cause chronic infections, most typically fish tuberculosis, of which more will be said later.

In many instances you will see several of these symptoms on the same fish, and generally the more symptoms you observe suggesting a bacterial infection, the more reliable your diagnosis will be. This in turn will mean that the use of anti-bacterial medications can be used with a greater probability of success.

Where signs appear severe and clear cut, it is critical to act quickly to prevent the infection from causing the death of the fish, or the infection from spreading to healthy, uninfected fish.
To get a better idea of what is going on, both live and dead fish can be sampled for bacteria to make a positive diagnosis. Unfortunately, collecting samples from fish requires a high level of expertise and access to specialist laboratory facilities and diagnostic equipment and should not be attempted unless you really know what you are doing.