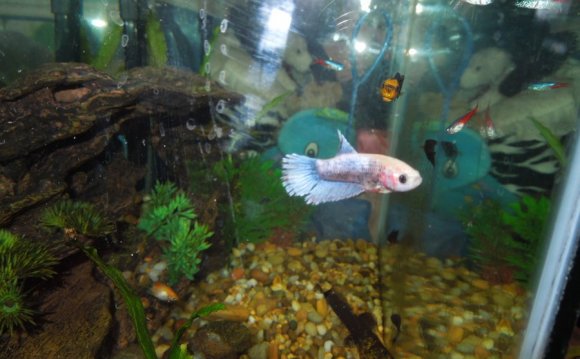 You may have seen tropical fish labeled as semi-aggressive and wondered if they were smart choices for your freshwater aquarium. This label can be confusing, and not all fish earn it for the same reason.

What does semi-aggressive fish mean? It sounds like these fish are violent, but only part of the time. Like, maybe every now and then they just go berserk, but most of time they are calm and peaceful.

Well, not exactly. When a fish is labeled semi-aggressive it usually means, under the right circumstances, the fish can be very aggressive. Very aggressive means it could attack other fish and kill them, eat other fish as food, or relentlessly chase other fish around until they die of stress.

On the other hand, under the right circumstances, a semi-aggressive fish can be very docile. While we can never know exactly what a fish is going to do, we can predict with a fair amount of success how they’ll react in different situations due to their temperament and natural habits. This means, if we stock our tanks wisely, even a semi-aggressive species can be a very peaceful community fish.

The first step is to know the fish you plan to stock in your aquarium. In this article we’ll take a look at many common semi-aggressive tropical fish and what makes them potentially dangerous to other inhabitants of your tank. If you understand these fish before you stock them, you can make sure everybody gets along, and reduce the chances of aggression in your aquarium.

Some fish just don’t like other fish in their space, and because of this they get the label of “semi-aggressive”. In reality, it you match them up with the right tank mates, the instances of conflict can be greatly reduced.

As the fishkeeper it’s your responsibility to make sure the little guys are safe from the big guys. This means picking fish that will cohabitate in your tank, rather than establishing a mini food chain.

Other fish that may be dangerous for anything that will fit in their mouth include bala sharks, red-tail barbs and silver dollars. They are generally peaceful shoaling fish, but if they can eat a smaller fish they will.

If you have such large fish in your tank, you want to stay away from small fish species such as neons and other small tetras, guppies, otos, ghost shrimp and small danios. Unless, of course, you are serving up an expensive dinner.

Some schooling (shoaling) fish are very active, and because they need to be in large groups they tend to get a little anxious in tank settings. Even little neons can get nippy at each other when tank conditions aren’t right. Of course neons aren’t considered semi-aggressive because they really can’t do much harm to other fish in the tank, but if they were bigger it may be a different story.

Large, fast-moving fish such as bala sharks, tiger barbs and tinfoil barbs, and even littler fish like cherry barbs, can cause chaos if the tank is too small and they don’t have the appropriate number of fish in their shoal. They may chase each other relentlessly, and may even pick on other species, particularly if they are smaller.

Whenever you see shoaling fish that are labeled “semi-aggressive” this is usually why. This behavior isn’t territorial or really “aggressive” at all, but instead a stress reaction to unsuitable conditions. The solution is to keep these fish in groups of at least six, preferably more, and in large enough tanks. As you can imagine, for fish like bala sharks and tinfoil barbs that can grow beyond twelve inches in length you will need a very large tank. For the average aquarium owner (even those with 55-gallon setups) these fish are way too large, and it’s unrealistic to expect to keep them without problems.

Most African cichlids are highly territorial and very aggressive. They should not be kept with other tropical fish species, even new-world cichlids such as angelfish or discus fish. A cichlid tank requires a great deal of research before you go out and purchase fish, and you need to know just how to set up the aquarium.

The environments of the great African rift lakes, where these cichlids come from, is vastly different than the tropical lakes and rivers most other aquarium fish live in. African cichlids are just a totally different kind of fish, and you have to know what you are doing to keep them successfully.

That said, cichlid tanks can be very beautiful and highly rewarding. They’re about as close as you can get to the vibrant colors of saltwater fish without the expense and hassle of maintaining a marine setup. If you want to go the cichlid route, take the time to learn about them and understand which fish can and should be kept together. Realize that you’re going to need a large tank (55-gallon minimum) and you’ll need to provide a lot of places for your fish to hide.

Some fish are simply too aggressive to be kept with other fish. This may be because they are territorial, or it may be because of their appetite. Or, sometimes it’s a combination of both. Here are a few fish you may want to keep alone.