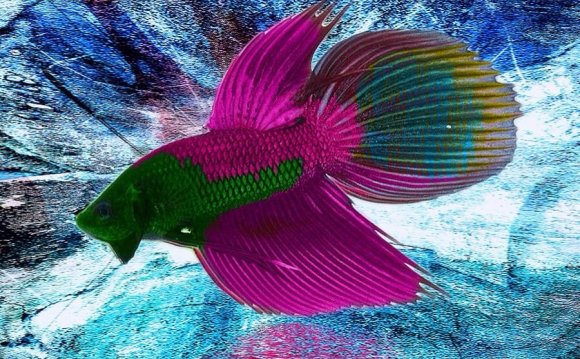 I don't know anything about this but the post made me curious. I found a reference to it on a forum that I obviously can't link but I can show the post for informational purposes.
Here is the post with pictures:
I thought this might be interesting to some of the forum members here who keep dragon scale bettas. If the scaling is particularly thick, it can sometimes result in diamond eye, which could hinder their eating and spawning activity. Banana leaves are a traditional thai treatment for diamond eye. I've found it to be very effective. But from my own observation, it affects not only the eyes, but the overall dragon-ness on the scales and even the fins of the fish. It appears to thin the dragon-y layer, resulting in less iridescence and revealing the other color layers underneath.
I've only kept 2 dragons so far, but the both of them had similar reactions when I put dried banana leaves in their tanks. I'd put a piece of leaf about 3x10in, and refresh it every other week. Their eyes cleared up noticeably within a few weeks of treatment. Though one of them passed away, I'm pretty sure it had nothing to do with the banana leaves, because I had removed the leaves for 5 days and returned them with no observable difference.
Here are a few photos of my surviving dragon. Both his eyes were completely clouded when I first got him in February. He isn't a prime specimen by any means, but I'm very proud of his recovery from when I first got him (besides diamond eye, he had SBD, fin rot & ammonia burns).
In early May:
And about a week ago:
Though I don't much like how the leaf treatment "uncovered" his red wash, I'm happy for the change in his behaviour. Since he can now actually see his food, he's grown much more active. And he's actually responding to me.