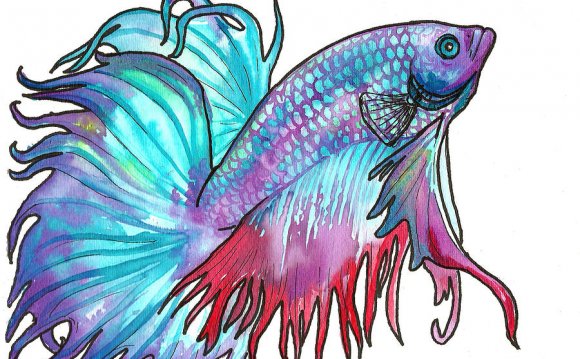 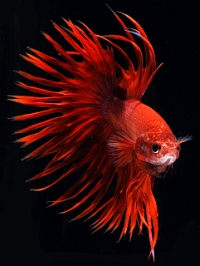 Below you will find a list of betta species and their groups. Click on the links within each group and sub-group to learn more about each type.

Habitat: They live in stagnant waters such as ponds, ditches, lakes, overflow pools and river backwaters.

Behavior: Males create bubblenests to support eggs. The female can produce up to 500 eggs in one spawning, depending on the species.

WaterTemperature: While spawning, the temperature should remain at 80 degrees Fahrenheit and should be checked frequently to sustain that temperature.

Betta fish, also known as Siamese Fighting Fish, are the most common pet Bettas on the market today. They are members of the class Teleostei, bony fish and the order Anabantoidei, which are more commonly known as labyrinth fish. These species have a specialized bone structure that allows them to breathe atmospheric air.

Bettas are native to Thailand and nearby areas of Southeast Asia. Presently, there are populations occurring in Florida as well as Brazil, where people breed them, then set free the excess Bettas into the streams and lakes. Bettas are fighting fish by nature. In their native habitat, they will fight to defend their territory or their future mate. In captivity, they have been used as a sport, being selectively bred for that specific reason.

Two males should never be placed in the same fish tank. Be careful when adding other fish to your aquarium. Make sure they are a peaceful and non-aggressive type. Fighting aside, Bettas have become a very popular fish worldwide. Their spectacular coloring and long-finned elegance make them extremely desirable for the hobbyist as well as the breeder.

The splendens group is native to Thailand, Malay Peninsula and parts of Molluca, Sumatra and Borneo. Although Borneo is not a natural occurrence, it was introduced to this country through human intervention.For further, specific information, see the following pages:

Bellica A larger variety of Betta fish, they grow to nearly 5 inches in length. The two varieties are B. simorum and Betta bellica. They are generally native to the Malay Peninsula and Melaka Strait.

Coccina These fish are a group of small and slender Betta species, which originated in the southern Malay Peninsula to Sumatra and northern Borneo. This group consists of B. coccina, B. livida, B. brownorum, B. rutilans, B. Persephone, B. miniopinna, B. tussyae and B. burdigala.

Habitat: They live in flowing streams in hilly areas or lowland swamps. Some enjoy limestone-rich regions.

Behavior: Adapting to flowing water, males developed a “bubble cavity” (throat), which holds the fry in a “nest” until they are developed and large enough to withstand the pressure of the moving water.

Water: Mouthbrooders prefer covered tanks with a fairly neutral pH of 6.5-7.5. They also enjoy relatively hard water and thrive with many live, rooted and surface plants in the aquarium.

Water Temperature: While spawning, the temperature should remain between 68-74 degrees Fahrenheit with a submersible heater.

Pugnax Group Mostly indigenous to the flowing waters of Sumatra, Malay Peninsula, Indo-China and Borneo, this group of fish has a rather large head and most times is greenish-blue. It includes the species: B. pugnax, B. pulchra, B. schalleri, B. breviobesus, B. enisae, B. fusca and B. lehi.

Waseri Group The Betta Waseri Group naturally inhabits southern Thailand, the Malay Peninsula and Borneo and consists of: B. waseri, B. tomi, B. spilotogena, B. pi, B. renata, B. hipposideros, B. anabatoides, and B. chloropharynx. They have been nicknamed the Big Yellow Mouthbrooders. They are about 2.5 inches in length, although some are less or a bit more. Each group is known for its distinctive black markings.

Akarensis Group Restricted to the country of Borneo, the Akarensis Group includes: B. akarensis, B. balunga, B. chini, B. pinguis and possibly two other species not yet named.

Foerschi Group The Betta foerschi group are a beautiful species, which consists of: B. foerschi, B. strohi, B. rubra and a currently unnamed class.

Patoti-Unimaculata Group A rather plain species of Betta fish, the group includes: B. patoti, B. unimaculata, B. ocellata, B. macrostoma and two to four species, which are currently unnamed.