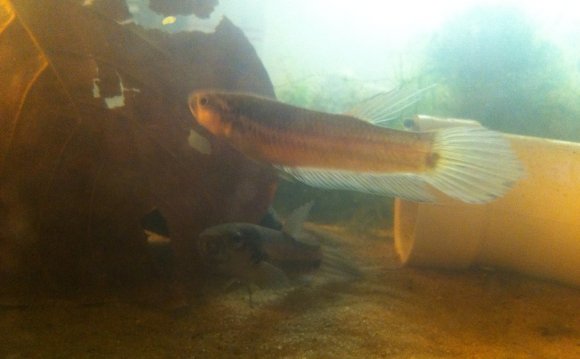 To refresh your memory, both male and female were introduced at the same time in the spawning tank. Female was placed inside a glass chimney and male released in the tank. The first thing that happens is the male sees the female inside her chimney glass and swims towards her, flaring. If the female is dark bodied and if she is receptive to the male’s display, she will soon have vertical bars on her body. Bettas get vertical bars when they want to spawn (or if they are scared). So, if your female has bars, you are in good shape. But if she does not, don’t be bummed, there is still a chance she will change her mind later she is after all, female !!! LOL ! Male will then look like he is possessed. Basically the testosterones are up the roof :)) !!! He’ll swim like crazy, darting and flaring and attacking the glass, unable to get to the grand price (yet :) ). Meanwhile she is a bit worried but soon figures out he can’t get to her, so she starts teasing him: “Look but don’t touch!” and might even flare back at him :).

Male gets busier still, alternating his showing off macho attitude with frantic building of a nest. The one to the left was so insanely thick I had to take a photo!! He’ll keep blowing bubbles on one hand and huffing and puffing at the female on the other for the next day or two or even more. But as soon as he has built his nest, or got a good head start on it, you should release the damsel. Then he realizes she is in reach, and she realizes that she can get her little fishie butt kicked, so a lot of confusion will take over the spawning tank. Some pairs may be gentle with each other, other will beat the crap out of one another. Usually, it is the female that gets picked on and after the first bite from the male she starts running for her life. That is normal. He will chase her around and nip her and she will run away for a day or two or even three. The female will usually figure out a way to hide from him, usually behind the corner filter, heater and of course the bushy plastic plant you have placed inside the tank for her protection. Her fins will be frayed, but usually she will take quite a bit of abuse before being truly endangered. Some males do kill the females though so you need to be the referee and keep a close eye on the honeymooners :) at all times. 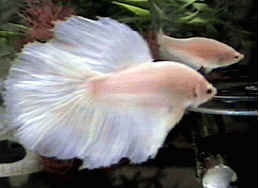 Then, out of the blue it seems, she decides she is not scared anymore and she swims up to the nest, checking it out. If she likes what she sees, she allows the male to get close and if all goes well, they start telling each other they like each other: She swims with her head down (often with her fins closed), indicating she is now submissive. He stops beating her up and instead starts swimming in an S like motion, rubbing his body against her (sheeesh this is starting to get a bit risque!!) :)))))

There she is, with her head down, under the nest, ready to start spawning. He tries to figure out the best angle to approach her for the embrace.

They often swim in circle, clockwise or counterclockwise, trying different angles and it often takes a while before they figure out how to do it best (some male NEVER do figure it out! Ha!! ) :P

To the left, the male is too high and she is too low, hence they failed to wrap, and had to try again.

They’ll keep trying over and over again for hours until they finally get it right.

And finally: BINGO! The male successfully wraps his body around the female’s and squeezes hard, they lock in that position for a few seconds, sometimes sinking both at the bottom, still not letting go of each other (how romantic!) :). First few embraces usually produce no eggs, but that doesn’t stop the bettas from having a grand old time. :) Finally the male releases her and swims away, usually to the bottom of the tank, looking for eggs. She lays motionless, floating pathetically, paralyzed. I am not sure why that happens, but the advantage is that it gives the male a chance to collect most of the eggs before she has a chance to get to them. Some females eat the eggs if they can get them first, but many more actually help place them up the nest with no intention to harm them or gobble them up :). Well, for now he didn’t find zip so he joins her again under the nest. I remember this male who got side tracked and forgot to go back up, and so after a while the female swam down, nudged him like she was saying “Hey, what about me, huh?”, and then he followed her back up and resumed the spawning!! I was amazed at how much personality she had!! 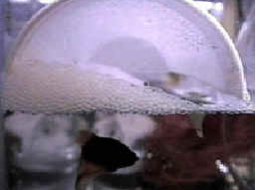 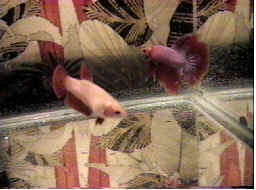 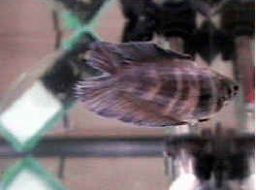 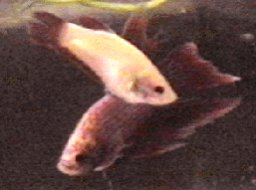