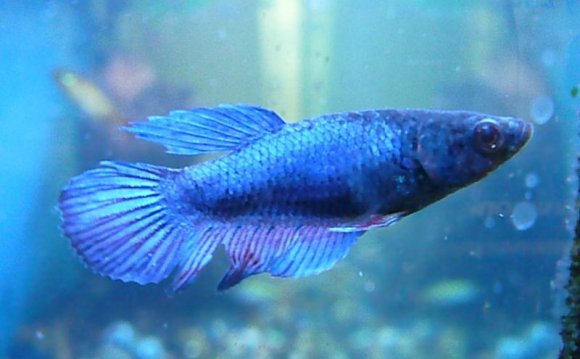 When facing a real opponent they showed a left-side bias for lateral displays.

There were no differences in aggressive displays between scenarios.

Surface breathing was more frequent and of longer duration in the mirror trials.

Mirrors do not reflect the behaviour displayed when facing a real opponent.

Displays are a feature of animal contest behaviour and have been interpreted as a means of gathering information on opponent fighting ability, as well as signalling aggressive motivation. In fish, contest displays often include frontal and lateral elements, which in the latter involves contestants showing their flanks to an opponent. Previous work in a range of fish species has demonstrated population-level lateralization of these displays, preferentially showing one side to their opponent. Mirrors are commonly used in place of a real opponent to study aggression in fish, yet they may disrupt the normal pattern of display behaviour. Here, using Siamese fighting fish, Betta splendens, we compare the aggressive behaviour of males to a mirror image and real opponent behind a transparent barrier. As this species is a facultative air-breather, we also quantify surface breathing, providing insights into underlying fight motivation. Consistent with previous work, we found evidence of population-level lateralization, with a bias to present the left side and use the left eye when facing a real opponent. Contrary to expectations, there were no differences in the aggressive displays to a mirror and real opponent, with positive correlations between the behaviour in the two scenarios. However, there were important differences in surface breathing, which was more frequent and of longer duration in the mirror treatment. The reasons for these differences are discussed in relation to the repertoire of contest behaviour and motivation when facing a real opponent.