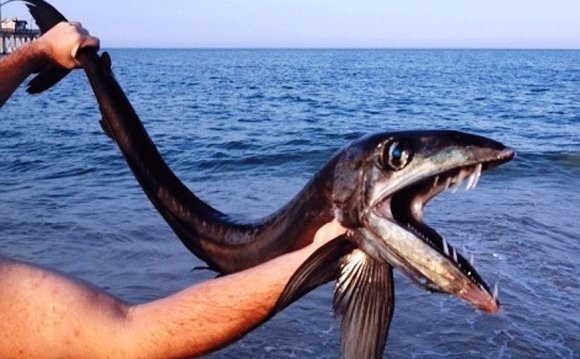 DANVILLE, Calif. (AP) — Mike Baughman considered himself one of the lucky ones, returning from Vietnam without any major injuries or psychological scars. But after falling ill nearly a half-century later, he found out he did not escape the war after all.

The 64-year-old is among hundreds of veterans who have been diagnosed with a rare bile duct cancer that may be linked to their time in the service and an unexpected source: parasites in raw or poorly cooked river fish.

The worms infect an estimated 25 million people, mostly in Asia, but are less known in America. They can easily be wiped out with a few pills early on. Left untreated, a cancer known as cholangiocarcinoma can develop, often killing patients just a few months after symptoms appear.

The U.S. government acknowledges that liver flukes, endemic in the steamy jungles of Vietnam, are likely killing some former soldiers. Ralph Erickson, who heads post-deployment health services at the Department of Veterans Affairs, said about 700 cholangiocarcinoma patients have passed through the agency's medical system in the past 15 years.

Less than half of those submitted claims for benefits, in part because they were unaware of a potential link to time in service. Of the claims submitted, 3 out of 4 have been rejected, according to data obtained by The Associated Press through the Freedom of Information Act.

The VA requires veterans to show medical conditions are at least "as likely as not" related to their time in service to receive financial help, but doctors note that often isn't easy with bile duct cancer caused by liver flukes.

The parasites typically go undetected, sometimes living for more than 25 years without making their hosts sick. The body reacts by trying to wall off the organisms. This causes inflammation and scarring and, over time, can lead to cancer. The first symptoms are often jaundice, itchy skin and rapid weight loss. By then, the disease is usually advanced.

If American doctors better understood bile duct cancer and the potential risks to those who served in Vietnam, they could use ultrasounds to check veterans for inflammation, and then surgery might be possible for some of them, said Jeff Bethony, a liver fluke expert at George Washington University.

"Early is key, " he said, adding he regularly receives desperate letters from veterans' family members. "The VA should be testing for this."

Once diagnosed, most men don't realize there may be a connection to their service in Vietnam. The few who figure it out often spend their final months fighting for recognition and benefits, leaving them feeling angry and abandoned, as many did when they first came home from the war.

"Hard to believe, " Baughman said in his living room, flipping through a photo album from his war days. "I dodged all those bullets, then get killed by a fish."

Baughman had just turned 19 when his draft number came up in late 1970. He was soon deployed to central Vietnam near Hue to do reconnaissance in the mountains. Although he was the youngest in his Army unit, he quickly became one of its most valuable members.

He would walk point clearing thick jungle with a machete and, thanks partly to growing up hunting in the hills of West Virginia, he proved gifted at noticing the smallest twig or leaf brushed out of place by the enemy. It was his job to spot booby traps and potential ambushes.

Often on long missions, sometimes forced to sleep outside with sheets of monsoon rain pelting down, his unit would run out of rations and go fishing for dinner near the border with Laos.

"We would throw a grenade in the water, and then scoop them off the river floor, " Baughman said. "We called it 'fish on a stick.'"

The men would use a helmet and a tiny blue smokeless flame to cook the fish as best they could, but it never really got done.

Years later, when he returned home, those makeshift meals became just another story he would tell about roughing it in Vietnam. He went on to earn a master's degree and became a successful engineer in Silicon Valley working for Atari, Apple and others.

In October 2013, he was about to remarry and decided to get a long-overdue physical. He felt fine, but his blood work indicated there might be a problem with his liver. Further testing revealed he had bile duct cancer.

After researching the condition, Baughman discovered that worms ingested decades ago in that raw "fish on a stick" could be killing him. He turned to the VA for help, and his private physician wrote a letter highlighting the potential connection between the worms and the disease.

He went to a VA doctor as well, who also acknowledged liver flukes were one of the main risk factors for the cancer but concluded there was "no evidence of infection" from Baughman's service time.

He was twice denied benefits in 2015, and is waiting for the results of his latest appeal.

Liver flukes are found mainly in parts of Southeast Asia, China and South Korea, where residents and tourists alike risk infection from specific types of freshwater fish such as tilapia and carp.

In one location in Laos, researchers found liver flukes — which can survive pickling and fermentation — in about 60 percent of villagers, and in some parts of Vietnam, up to 40 percent were infected. Experts say it's hard to know how many people in the region may be dying from cholangiocarcinoma caused by the parasites because there are few cancer registries.