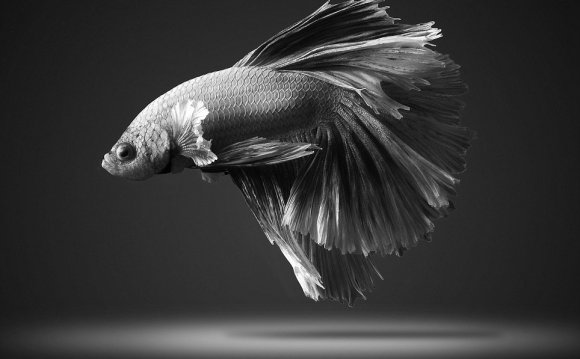 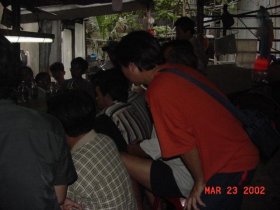 Introduction I traveled to Ho Chi Minh City, Vietnam from the 22-25th of March 2002. The purpose of this trip was to explore my knowledge of Siamese fighting-fish being developed outside Thailand. I have heard many things from my clients and friends about the Vietnamese strain of fighting fish, a renowned fighter that obtained very tough scales and good structural conformity.

My visit to Ho Chi Minh City (HCMC) would never have been possible had it not been for my very generous Vietnamese friend who monitored my 3 day stay in HCMC. I would like to express my gratitude to him for his kindness, and of course we exchanged some prized stock with each other.

The best and most direct way to learn about fighting fish is to visit the fighting fish in the ring. In the ring you not only see the fish actually fighting but you also get to see the expertise of the breeders and players of the game. You can directly learn, from the way they talk and the way they care for the fighters.

There are two main topics we can discuss; one is the actual fighting fish ring and the other is the breeding procedure to get the true fighters. I have found that there is not much difference between the practice of these two things in either country.

Since my trip to Vietnam was in such a short period of time, the opinions expressed here are of course only surface level observations. All of the information and attitudes I have presented in this article are my personal views of the material. Any mistakes in information I present here, I alone am responsible for. I would appreciate it if anyone would correct any mistakes I may have made.

Short Review of Siamese Fighting-Fish in Vietnam The Vietnamese call Siamese fighting-fish Ca Siem which means Fish from Siam. A breeder once told me that the Siamese fighting-fish had been introduced and developed in Vietnam, over 100 years ago. His father and his grandfather before him were both breeders of the Siamese fighting-fish; he is now 50 years old. He said that the Chinese were the first group to introduce the fish to Vietnam. I believe that Chinese merchants or sailors were the first group to carry the Siamese fighting-fish from Thailand or Siam to Vietnam. In the year 1840, under the reign of Thai King Rama III this could be considered the golden age of Chinese sea trade in Thailand (this was the year that King Rama III presented Theodor Cantor with the Siamese fighting-fish, who then introduced it to the western world.) The Chinese sailing crews played fish fighting games while they were at sea in order to keep them entertained. When they docked at sea ports the sailors would bring fish with them ashore and share the game with the local people. Only the people of Southeast Asia took this game into their daily lives, as opposed to other countries that chose not to participate. I believe the land traffic in Southeast Asia is responsible for the spread of the Siamese fighting-fish games. Human interaction and relationships along with good understanding of people made the fighting strains spread all over Southeast Asia. Breeding, keeping, and playing fighting fish games became a unique and acceptable practice among the people of these countries.

When I first saw the Vietnamese fighter it reminded me of the images of fighting fish I had as a child. I remember the short and thick structure of the...