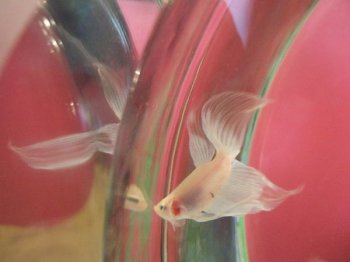 Sometimes, male fighting fish have been found attacking their own reflection on the tank walls. That is how aggressive they are. You could place the male fighting fish in a tank with other fish belonging to different species, and which are more placid. If there are other fish which physically resemble a male fighter, there might still be a tussle, which you would want to avoid.

Bubble Nest: You might wonder how the young fighting fish are born, if the males are just fighting all the time. It is only in captivity the fights become very intense. In the wild, the fights do not last very long as the loser will retreat. The male fighting fish builds a bubble nest while mating with the female fish.

They will protect the eggs till they are hatched, after the female has laid all of them. The bubble nest provides a protective layer for the eggs, and helps the males to ensure that the eggs do not stray away. The female might eat the eggs once laid, so the male fighting fish protect their young till they are born. Just imagine, the males who were fighting tooth and nail a while ago, now become vigilantes of their young ones.

Betta matches: Heard of cock fights? It is not something new and most certainly a form of animal cruelty. People place bets over their choice and the fights commence with a lot of squawking and feather loss. Cocks are not the only creatures forced to fight each other, fighting fish have also been bred for fights. The Siamese fighting fish originated in Thailand and was popular due to the fights that were organized between the male fish along with the betting. These fights continue even today, where fighting fish are bred in captivity to increase their aggression. The main goal is to raise champions who will last long in fights, as the fish which retreats first is deemed the loser.

Fighting fish are incredibly fascinating. They are an excellent combination of beauty and power. It is hard to imagine so much of aggression in such a small package, but the Betta fish do deliver!

Walk into that pet store and get yourself a fighting fish. If you think fish are the right pets for you, then the Siamese fighting fish is an excellent choice.