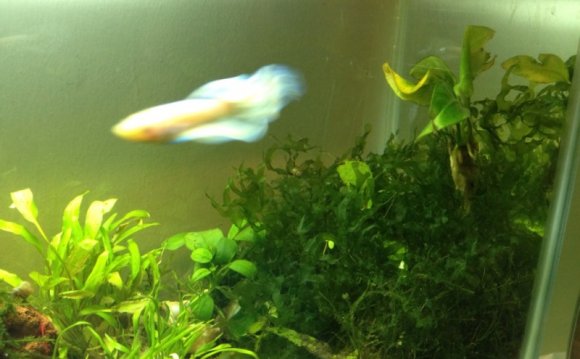 You may have bettas that are just the opposite of mine. This method, and the information contained in this instructable, is from my personal experience and online research.
I take most online information with a grain of salt, except for the information on Instructables, of course !

Here's a quick example: Online, I read that bettas do not like currents, since they live in puddles in their native habitat. This rules out the use of most filter units that work well.

Well, I had a betta in the past, but one day he got his feeler caught in the marble-shaped glass beads on the bottom, pulled part of it off, got an infection and died.
He was a great fish, with lots of character (for a fish).

After that, it was about 5 years before I tried again. My girlfriend and I were shopping when we found 3 (yes THREE) betta fish. We couldn't decide which one we liked best, so we bought all of them, and housed each one in a separate glass vase.

I know that a lot of people say that these fish don't need a filter, swimming space, food,
and all kinds of other crazy stuff.
They may be able to live in a very small jar with no filter, but is that healthy for them ?
Do they like it ?

The plant idea is also junk. These fish are meat eaters, and at some point they will nibble at the plant's roots when they are starving. The betta in a jar with a plant and no food is a BAD idea.

You have to maintain the roots and leaves of the plant to keep from having dead roots in the water, and you still have to feed the betta !

Long story short, it became a major pain to clean all 3 vases every 2 weeks. I tried a little filter that worked on the movement of air to draw water through the filter. It didn't really do much, except amuse the fish, and if you moved the filter (to clean it) it would release all kinds of junk back into the vase.

So I hit craigslist and purchased a 10 gallon aquarium with a stand and light for $15.