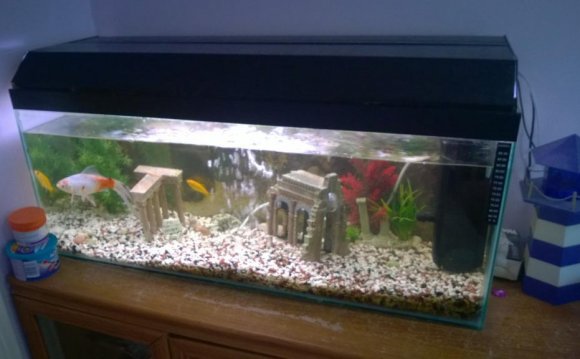 1) Not Treating Tap Water Properly (Or at All)

Tap water has chlorine—safe for humans, a death sentence for aquatic creatures. Most of us learned this early on; either tap water must sit out for 24 hours so the chlorine evaporates, or treat it with one of the numerous dechlorinaters out there to get rid of the chlorine instantly.

But chlorine isn’t the only danger in tap. There can be ammonia and nitrites in tap water (again, safe—just barely—for humans), which is why more experienced hobbyists use such dechlorinators as Prime, a treatment that detoxifies these poisonous chemicals in addition to removing chlorine.

There may be other dangers that cannot be treated by liquid in a bottle. For example, extremely high or extremely low pH, heavy metals, and high nitrates can exist in drinking water, the last being the worst offender (as partial water changes would be pointless). If these levels are dangerous, most would suggest a R.O. system that hooks up to your pipes in order to filter out these pollutants.

This mistake is way too common, and ties in with the fact that a lot of people don’t know about the nitrogen cycle. We were taught we must perform partial water changes in order to remove fish waste, before it compromises the fish’s health, but it isn’t that simple. The truth is fish are constantly living in their own filth; they urinate and defecate every day. So how do we get away with performing partial water changes? How do fish last so long before then? Answer: The Nitrogen Cycle.

A natural process built over time, beneficial bacteria eats toxic ammonia produced by fish waste, turning ammonia into nitrites, another toxin (albeit less toxic), and then the bacteria eats all nitrites, turning them into nitrates, the least harmful and only toxic at 30-40ppm. So a chain follows in this natural system, turning the toxic presence into a safe one, until nitrates (the end result) get too high, which is the point of performing water changes; we do it to reduce nitrates.

However, you don’t have this beneficial bacterium when you set up a new tank. In order to build this system, you must have water, a running filter, and ammonia to start the process. It takes anywhere from 4—8 weeks for the cycle to complete, and then it will be safe for fish. Details of performing a fishless cycle can be found here.

Of course, a lot of people don’t like the idea of having a running aquarium for 1-2 months without anything living in it, and will resort in putting hardy fish in to help regulate ammonia and the cycle, but I discourage this. You will lose those fish eventually during the procedure, and it’s just cruel.

If you are too impatient to wait, you can buy beneficial bacteria in a bottle, and reduce the 4-8 weeks to a week.

3) Too Few Water Changes and No Gravel Vacuuming

Doesn’t matter how good your filtration is, the end result is always the same: nitrates. Unless you have nitrate-absorbing filter media, only partial water changes with low to no nitrates will reduce them significantly, giving your fish a breath of fresh air—so to speak. No matter how light the biological load is, you can’t get away with monthly water changes and expect healthy fish. Nitrate poisoning will kill and add even more nitrates to the water (from the carcasses), in addition to causing mini cycles.

You can get away with biweekly water changes, but the amount changed will have to be a big percentage, and this depends on water and waste ratio. It’s better to perform small weekly water changes than large biweekly ones, but it can be done with a light bio load.

I don’t know much about bowls, but when changing out an aquarium, you want to avoid performing more than a 50% change within 24 hours, unless it’s an emergency (like exposing bleach in the tank). Some say huge changes are a don’t because you lose beneficial bacteria, but bb grows on the surfaces of objects in the water; only a tiny percent are in the water itself.

The real reason you don’t want to perform huge water changes is that you may put your fish in pH shock. PH is the level of acidity (soft water) or alkalinity (hard water-minerals) in the water, and while most ranges are tolerable for fish, fluctuating pH can kill.

Water straight out of the tap often changes in pH after being exposed to air for 24 hours. This isn’t always the case, but it is the usual. My tap comes out at 7.4. Twenty-four hours later in a cup, it’s 8.4. It was this in reverse in my last home.

PH shock will stress and potentially kill fish, especially if their immune system wasn't up to par to begin with. When changing pH, it must be gradual. It’s often recommended to not change your fish’s pH more than 0.3 within 24 hours, unless they are hardy fish, then you may get away with a 0.5 change. This is why small partial changes are better than big ones.

If you must perform a huge water change (if it can wait), let all the water you plan to put in the tank sit out for 24 hours.

5) Removing All Filter Media at Once and Rinsing with Tap

Most beneficial bacteria live in the filter, specifically on the filter’s media (floss, charcoal, sponge, ceramic rings). The filter may “polish” your water, keeping it clear and odorless using charcoal, but the true purpose of the filter is to keep your fish alive through the nitrogen cycle. I hate how Hang On the Back filter (HOB) companies encourage the practice of completely switching out the filter media for the sake of convenience. You are doing harm to your tank every time you replace that cartridge with a dry one, for beneficial bacteria has to be kept wet.

Instead of replacing the entire cartridge, just rinse it in order to knock off built-up debris in the floss encasement (so water can properly flow through), and just replace the active carbon if you wish to continue chemical filtration (although many consider charcoal to be a gimmick and unnecessary). While charcoal should be replaced every two weeks, the filter floss can go a month without replacing—in most cases. But if you are rinsing filter media, don’t use tap water. Chlorine kills bacteria, so instead, rinse or scrub the floss gently in a bucket of aquarium / dechlorinated water.