Why do Betta fish make bubbles? 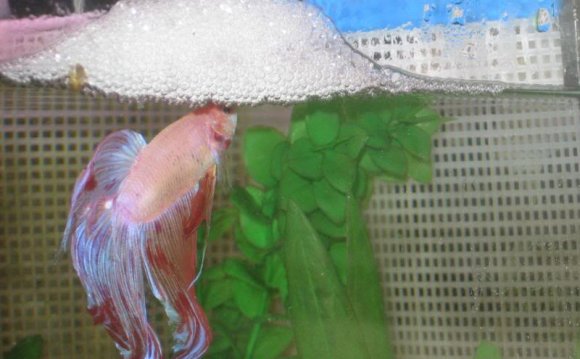 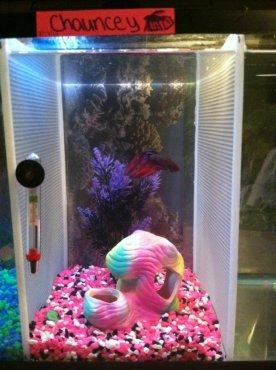 There is a weird film across the top of my betta tanks.
I have 2 tanks, one is a 2.5 gallon with one male betta. The other is a 10 gallon which i divided into 3 sections, with only the middle section having a male betta at this time.
Both have a filter and a heater.

I set up my 10 gallon 2 whole days before bringing home a new fish to add. With in 30 mins of him being in the water, there became a film over the top of the water.
It is very thin and clear-light milky in color. It produces a rainbow effect the way oil does. If i touch it it breaks up the way a sheet of glass would when shattered.
My 2.5 gallon also ALWAYS has this and i figured the tank was too small.

What is this caused by and can i fix it?

ALSO, my new fish has what i believe to be fin rot(some of the ends of his fins are curled with a tiny white spot on their ends)
How can i fix fin rot?
Is a contagious if i added another fish to another section of the tank? 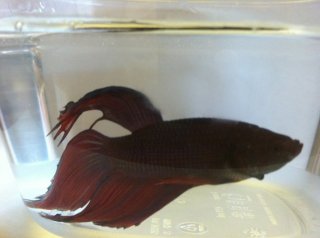 Pictures: 1st-my new fish Chauncey and his section of the tank.
2nd-close up as i could get of his fins.
3rd- the 10 gallon how its set up right now(only one fish in the middle section)

If you waited only two days before adding fish, the aquarium does not have a working nitrogen cycle:

Aquarium shops do not always tell customers about the nitrogen cycle, but it's vital to fish health.

The oil slick on the water surface is probably not harmful. A clean paper towel should remove it.

Oh gosh! I had no idea. No one at the pet store said anything like that.
I thought i was crazy even waiting 2 days.

Is there something i could do if i've already added the fish to the tank to get the level correct?
Or would i need to house him in a different tank for a few weeks while this one runs?

Two good corrective measures are to feed the fish no more than they actually eat in a couple of minutes, and change about 20 or 25 percent of the water every two or three days. Adjust replacement water temperature to roughly that of the aquarium, and treat it with a good tap water conditioner like Stress Coat Plus. This and several other water conditioners temporarily neutralise toxic nitrogen compounds and thus allow more time between partial water changes.

If you ask the pet shop to check water parameters, ask them for numerical values and not just OK. Some standards allow potentially harmful concentrations of toxic nitrogen compounds.