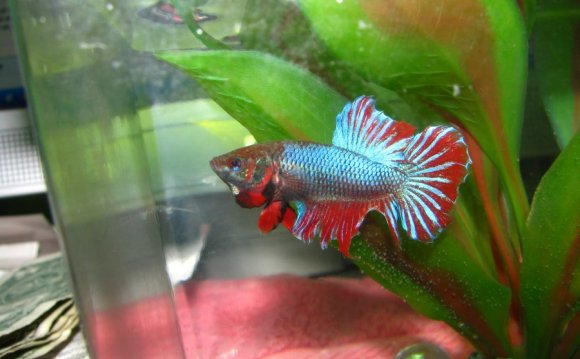 U Warriors by nature

The Betta Splendens (splendid warrior), is, as his name indicates, a warrior. Basically, he is a fish with a bad attitude problem :))). The thing is bettas are only pissed off at other bettas, while quite gentle with other specie, which makes them good community tank prospects. They do get picked on a lot by other fish, so avoid putting a betta in a tank with fish that are aggressive, especially fin nippers such as tiger barbs, etc…

u Flaring and displaying

When a male betta (and sometimes a female) sees another male, his first reaction is one of intimidation. The betta will immediately stretch out his fins as much as he can and open his gills as wide as he can, displaying his membrane, and suddenly looking twice a big as he really is :). This is called FLARING or DISPLAYING. He’s doing the macho thing, sorta like “I am bigger than you, watch out, I can kick your butt!”. He will repeatedly do this and if the other betta has the same bad attitude, they will soon start attacking each other. (so never put two bettas together!! Duh!) Their color intensifies and they look just gorgeous. .

above: a betta at rest (left) may not look
all that threatening.


The same betta flaring appears to be twice as large, hence intimidating rivals. Over activity may cause the tail to tear, especially in halfmoon bettas, a phenomena known as "blowing a tail". Notice slight tears in the above halfmoon betta's tail.

Because bettas are not as intelligent than us (or are they? :)) ) you can get the same result by putting a mirror in front of them. Well, it’s not really that they are dumb, but they don’t know what they look like, so when they see the betta in the mirror, they don’t know the betta is actually THEM.:) This makes for hours of fun watching the whole commotion. And no, bettas will not get exhausted, as a matter of fact, I have two brothers jarred side by side who have been continually flaring at each other for a year now. I believe that a little action and company is good for the moral. So I let my bettas see each other. This is not a good idea though, if you intend to show your bettas. Sometimes, a betta who looks lethargic will be stimulated by replacing his neighbor. A new neighbor equals a new pecking order to establish and a whole new desire for flaring.

u Aggression and fry

As babies, betta fries share the tank space peacefully. However, as soon as the fast growing males start showing some fin growth, they also start showing off and having a macho attitude with other males. As they grow bigger, their bad attitude grows bigger, too. Soon, little males will display for each other. And give it a few more days, they’ll start taking chunks out of each other’s fins.

That is when the breeder steps in and jars the bullies. Soon, all males have to be jarred and only females will be left together.

u Variations in aggressive behavior

Some strain are noticeably more aggressive than others, and even the females are nasty to each other. Some strains are more peaceful and can sometimes be kept in groups. A breeder friend of mine was marveling at my large 60 gal community tank, housing about 40 adult bettas, mostly females but also three large males. He couldn’t believe they weren’t killing each other! These bettas were all from the same spawn and knew each other. This strain was a more gentle strain and it was a treat for the eye to see all these bright red and pink bettas swimming in harmony together. (Please do NOT try this at home! :) ).

u The pecking order

When kept in a community tank, bettas will establish a pecking order. One dominant fish will boss everyone else. This is usually a large male or female, and that fish is known as the “ALPHA” fish. As long as that fish is in the tank, there will be pretty much, peace. Remove that fish, or add new bettas to the tank, and the pecking order has to be established all over again. Fights arise, bettas fins are frayed, and for a week or so, the whole fragile balance is threatened. Eventually, it settles down, and peace returns.

u Why do bettas fight?

Hey, I fooled you. Did you really think I had the answer to that one? Of course not. When Animal Planet interviewed me, they too tried to make me spill the beans, but I had made a solemn promise to my bettas that I would never ever tell anyone (unless they knew the secret betta handshake, that is LOL)... How bettas survive in the wild is also a puzzle, knowing how unsociable they are. How do they share a small pond? I assume there is a lot more places to hide in the wild and that bettas avoid each other like the plague but I might be wrong. After all, I heard a researcher took two male bettas and went to the middle of a large lake. There he released them. Having all the space in the world, what did they do? They proceeded to flare at each other and fight. Go figure. I concluded that fighting is not linked to territoriality when it comes to betta. More like a nasty bad habit. Or maybe an addiction? :)

u Other betta characteristics

What I like most about bettas, is that they have personalities. Each his own. They are curious, friendly and will soon know their breeder and recognize him/her. They are fast learner. They soon understand that my hand = food. Soon, whenever I put my hand in the tank, they all come swarming and they become so friendly sometimes they bug the heck out of me. Here I am trying to fish out one specific betta, and all of them come and soon it is a huge crowd and I cannot for the love of me fish just the one out, I keep getting 3 or 5 in my net. Aghhhhhhh.