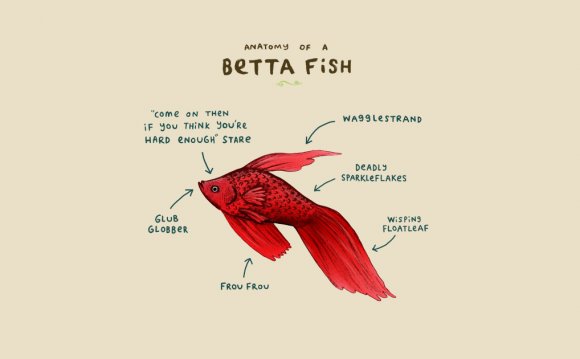 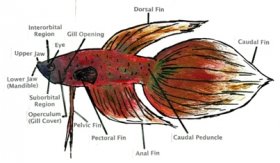 Did you know that both the male and female Bettas share similar anatomical features?

Equally, they have a cylindrical form, with the anterior part of the body tapering to a laterally compressed shape. The pelvic fins are quite long and extended, particularly in the male. The dorsal fin inserts behind the midpoint of the back and varies in length from short to moderate. In domesticated male Betta splendens, this fin can be exaggerated into what appears to be a huge sail.

The male Bettas are much “flashier” than the females with brighter colors and longer fins. The female Betta has color, but it is muted compared to the male, and her fins are shorter.

Also, Bettas’ eyes protrude because they do not have the ability to blink. Their mouths are also particularly interesting. With rows of tiny, pointed teeth and powerful jaws, they are perfectly designed and positioned to both devour prey and to blow bubbles. Proportionately, Bettas have bigger and stronger jaws than the great white shark! What is further intriguing about them is the way the males gently carry the fertilized eggs in their mouths to their bubble nests without damaging them on their sharp teeth.