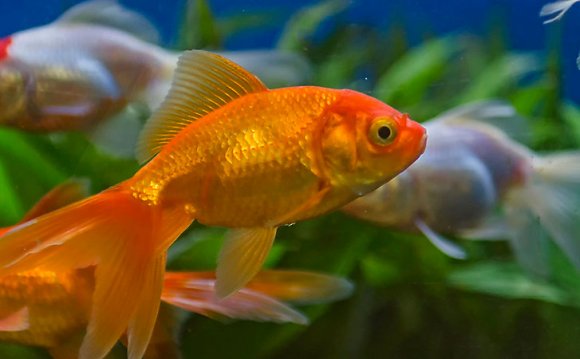 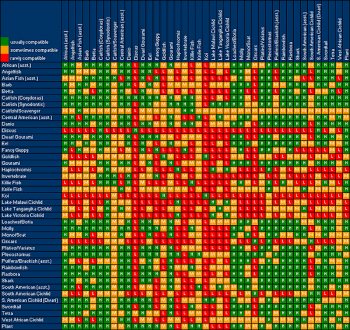 Mixing fish together in the aquarium can be one of the biggest challenges faced by the hobbyist, especially in aquariums 200 liters and smaller, which is what most of us are dealing with.

Many times a hobbyist brings a fish home, a fish which "the guy at the pet shop said would mix ok", only to find that this fish doesn't get along at all with another fish in the aquarium. Learning to predict these situations before they happen often can only come with experience. Hopefully I can point out some things to consider and some things to avoid, when looking to develop a community of fish in a small glass box.

One thing you have to understand is that fish behave instinctively. You can not "train" a fish to get along with another fish. Fish instinctively are concerned with 2 things: feeding and breeding. When you add a new fish to an aquarium, the established fish now have competition for attracting a mate and for establishing a territory from which to feed. For many fish this "territory" can be the entire aquarium.

One of the most common mistakes I see aquarists make is to add more than 1 male Gourami to the same aquarium. Almost everyone knows that you can not keep 2 male Betta's together. But did you know that Gourami's and Betta's are very close cousins?

The behavior of 1 male Gourami toward another male Gourami can be nearly as aggressive as when mixing male Betta's. The reason for this is simple. The male Gourami does not want competition in attracting female Gourami's. When another male enters his swimming space he will chase this male viciously until it moves on to another part of the lake or stream. Unfortunately, in the aquarium the 2nd male Gourami has no place to hide and no place to escape.

The result is constant torment from the first male until one of two things occur: 1) the fish becomes sick and disease spreads throughout your aquarium OR 2) the fish finds a gap in your hood and jumps out of the tank. All of this could be avoided if the aquarist simply purchased 1 male Gourami and multiple females.

Many fish will display similar behavior. You may notice that male Livebearers do not get along all too well. Fortunately they do not require much space apiece, so you can mix multiple males in an 80 or 100 liter aquarium. But, trying to add 2 male Swordtails in a 40 liter aquarium can sometimes prove difficult. This usually does not apply to schooling fish.

Most Barbs, Danios, Rasboras, and Tetras do not pose a problem when mixing multiple males together. The problem arises when trying to add a new member to the school. Any school of fish will establish a pecking order in the aquarium. The dominant male will take the top spot in the pecking order and is rewarded by being at the center of the feeding area and with having the attention of the dominant female. There is a pecking order present throughout the entire school.

When you add a new member of this species, then entire school order is disrupted. The established members of the school are healthy and adapted to life in your aquarium. The newly introduced member of the school has not had the opportunity to settle into your aquarium and is stressed from the move. Its odds of survival are questionable at best.

Even if it does survive, odds are good that it will experience so much stress from battling within the school, that it will develop disease shortly after being added.

The easy solution to this problem is to add all of the members of a school to the aquarium on the same day. If you decide to add more members later, then add several more. This will disrupt the school further and allow the new fish to settle into the school with less stress.