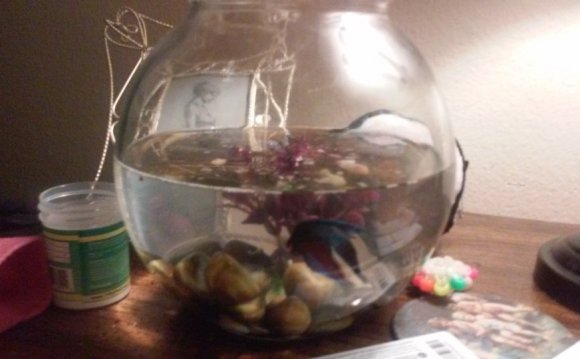 She is a female betta so she isnt brilliant colored already but she was blue and red and now she is greyer. She can't swim very well and she sort of tips over when she stops. she stays at the bottom and only comes up for air and food and it seems to take a lot of energy to get to the top so i put her in a smaller bowl with shallower water. She still has an apetite, i've fed her only a couple peiced of peas for the last three days until today i gave her two pelets because i didnt know how much peas your supposed to give them. i think she has the symptoms of swim bladder but i dont dont know how long its supposed to last? she doesnt seem to be getting any better...and she hides under her bridge a lot more sometimes and sometimes she seems like she really wants to be active and she tries to swim but it just looks difficult for her.

Further communication on this topic has been disabled.

Moving her to different aquariums is not a good idea, because it puts more stress on an already stressed fish. The color loss is normal if the fish is sick or stressed. Have you checked your aquariums for ammonia and nitrite? Both compounds are toxic to fish, and one or both will be present if the aquarium has not completed its nitrogen cycle or if it hasn't had a partial water change for a while. You can read more about such things by using the search button at the top of the page.

How often do you change her water? What size is her normal tank? Does it have a heater? How long have you had her?
Make sure you boil the peas first, and mush them up a little. They will take between 12 and 72 hours to work. She will be fine not eating for a few days.
Like John said, the new water and tank will probably stress her out more, but lowering the water level in her normal tank (if possible) is a good idea, so she doesn't have to work so hard.

maybe ammonia poisoning...do you have a filter in her tank? The loss of color and other symptoms you described are definately signs that something isn't right but I'm not sure moving her to a smaller, shallower bowl is the way to go...if you don't have a filter system, you may want to consider getting one, and if you do have one, check to make sure the insert is clean. Try a 1/3 water change(in her regular tank) and some aquarium salt. Check her thoroughly for signs of fungus or parasites...there are lots of online sites with good pics to show you what to look for, specifically.

I had 3 male Beta at one point(of course in different tanks!), and had them for years. A loss of color usually signals a water change. They will lose their color, become weak, and eventually lose their appetites and die due to their excrement build-up in the water. Do a 10% water change over the next 10 days, or 20%(if she is stable enough to do so) over 5 days and that should clear up the problem.

Also, Beta are very sociable creatures that thrive off attention of their masters/other beta( EVERY ONCE IN AWHILE, NEVER IN THE SAME TANK). Fish are intelligent like birds, and love attention. You being near them or in the same room is a good thing for a Beta. They even recognize their handlers! So maybe she needs more socialization. Move her tank to a populated area of the house, and if budget permits you, get another small tank and beta and move them next to each other 1-2 times a week. They flash their brilliant colors, extend their fins and gills, and make a showy display that is healthy for them and fun to watch. Just make sure they cant see each other on a daily basis because that could result in injury(repeatedly ramming into decorations and the sides of the tank in aggression) and over-socialization. If budget doesn't permit, get a hand mirror and socialize them that way. I just find Betas enjoyable, therefore I recommend 2.

I forgot to mention, while a filter equals less maintenance, a Beta's thriving environment, in the wild, were rice fields in which there is not much water flow. For this reason, they were able to adapt and breathe actual oxygen from the air because there was not much aeration in the water. They are not powerful swimmers and having a filter could damage their very delicate fins, get t hem stuck to the filter vent, or push too much water on top of them, causing them to drown. I would never recommend a filter in a small tank. Just make sure you keep on top of the water changes and they will thrive for years.

It might be her age/you might not change the water enough/or the you should by annother bigger tank for her.

Your fish is either getting old or is having problems with its swim bladder, which if left untreated will kill your fish

did you check her temperature?Instead of peas give her betta biogold change her water every week. do you have a filter?