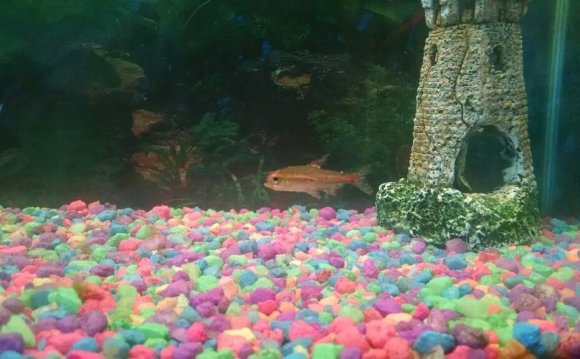 I go to one Walmart, I was practically raise in, and I have become a major betta lover (and any fish, period). I like going to see what all they have/how they look, color wise and health wise. One time, of many, I told an employee, that had come to help (after waiting 20 mins, for ONE of the 3 to 4 times, me and my husband called for assistance), that when I see a dead betta(s), I take it and put it in the sink, so they will see it. He looked at me funny, as if he knew, and said, 'You do that?' I said, 'Yeah'. I told him, 'I figure I'm helping you guys, so you don't have to go through all of them, and it makes the display look better' (plus no one will want to buy any betta's. If they see dead one's, they will think all of them are sick and dying.) He said, 'Don't do that, that's our job'. I gave a look (as we started to leave (with No fish)), of not being very happy, and thought to myself 'Then DO your job and TAKE CARE OF THEM!'

The pet department/fish area, especially, is always dirty. The floor has not been swept/kept up. The fish tanks and deco are sometimes broken and misplaced, dead fish (newly dead and days dead, and sometimes even weeks, dead), dead algae eaters, poop and muck all over the tanks, Ich and diseased covered fish, dying and barely swimming around, dozens of dead ones blocking the flow of the filter. It's terrible. Of the guppies and Neon Tetra (the blue, purple, red, pink, and green ones), there will be 20 to 40, sometimes 50, in a tank, one day, I come back a few days later, to see what is new and improved (HA!), and 75 to 95%, will be dead or dying, with the others, not looking so hot. Sad.

A small, one gallon fish tank, I had bought for one of my betta's, didn't have an air pump in the package, like usual, so I took it back, to exchange it, and the next day, I went back to the pet area, to look at something, the one I had returned, with NOT ALL THE EQUIPMENT IN IT, IN THE FIRST PLACE, was sitting up on the fish tank shelf, tapped up, to try to resell.Really?. Walmart, knowing full and well, the box doesn't have EVERYTHING it SHOULD HAVE in it and you are trying to sell it. This was last year, I believe in the early fall, and today, 7/30/2013, THAT VERY FISH TANK I RETURNED IS STILL SITTING ON THE SHELF, WAITING FOR SOMEONE TO BUY IT. Pretty Freaking ridiculous.